“…the perfect intersection between their pop and psychedelic tendencies,” – Exclaim!

“a dose of pure gold” – Spectrum

“If you’re looking for feel-good vibes and a mighty pick-me-up, then you needn’t look any further than Vancouver-based powerhouse Yukon Blonde.” – Line Of Best Fit

Fresh off the release of their new acclaimed LP, Critical Hit, Yukon Blonde are pairing up with The Zolas for a run of dates across Canada this fall in addition to their already announced summer festival stops. Full tour dates can be found below. 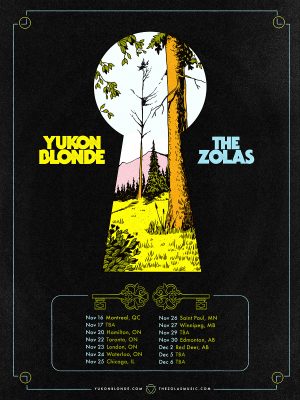 With three full length LPs to their name, including 2010’s self-titled debut, 2012’s Tiger Talk, and 2015’s On Blonde, Vancouver psych rock outfit Yukon Blonde have cemented their status as a Canadian powerhouse, earning comparisons to The Flaming Lips and Phoenix, delivering a welcomed throwback to the 1970’s glory days of rock’n’roll. After linking up with producer Thom D’Arcy (Sheepdogs) and mixer Tony Hoffer (The Kooks, Beck, Air) for their fourth album Critical Hit, out now via Dine Alone Records, they’re aiming to show that Yukon Blonde is much more than just rock, incorporating elements of electronica and erratic pop with their familiar garage rock sound.

The 13-track album is a deeply personal proposition on dating in the digital age. The record channels the varying emotions experienced while navigating the sometimes treacherous waters of today; It’s sometimes tenuous, sometimes depressing, and sometimes jubilant. “It’s hard to do a song by song breakdown, because as much sarcasm and wit as there is on this record, there is some intensely private shit in the lyrics too, and sometimes the vibe is just more our obsession with synthesizers and drum machines, aesthetics over lyrics,” vocalist Jeff Innes says.