Violent Soho are thrilled to unveil their blistering new single “Like Soda”. The track will be available to purchase via iTunes and on all streaming services on Friday October 9th. Listen to “Like Soda” below.

Recorded at The Shed studios in Brisbane with producer Bryce Moorhead (the same location and producer that they worked with on Hungry Ghost), “Like Soda” gives fans a first taste of what is to come from the beloved Mansfield four-piece.

The song opens with little fanfare, simply lead vocalist Luke Boerdam, his guitar and as he describes, the imagery of “those empty summer afternoons in a RSL and pubs – when all the pokies are empty, beer is warm and there’s nothing but horse-race noise in the background.” As the song builds, the rest of Violent Soho aren’t far behind and come steamrolling in at the one-minute mark as the track explodes into all out chaos and fury. As Michael Richards drums drive the track on frenetic pace, Luke Henery (bass) and James Tidswell (guitar) act as the perfect support for Boerdam’s lyrical tact that floods the track as he bellows out about the stale suburban life that we all play a role in.

As he reflects on the song, Boerdam reiterates, “There’s no resolution in the song – its just describing a daze we’re all in.”

In September 2013, the four childhood friends from Violent Soho unleashed their third studio album Hungry Ghost in Australia and in doing so, set off a chain reaction of events that no one could have predicted. Debuting at #6 on the ARIA charts and remaining in the top 50 for over a year, Hungry Ghost seemingly became a favourite not only in Australia, but also around the world as people continually shared the album with their mates.

It was this reaction that saw the band spend 2014/15 touring constantly on their own sold out headline tours and festivals like Splendour in the Grass, Groovin The Moo, Triple J’s ‘One Night Stand’, Big Day Out, Falls Festival etc, signing deals with Dine Alone Records for Canada and SideOneDummy for the US and Mexico, featuring in the top 15 of the Hottest 100, receiving multiple ARIA nominations and lastly but certainly not least, receiving the ‘Album of the Year’ and ‘Rock Album of the Year’ awards at the 2014 AIR Awards. 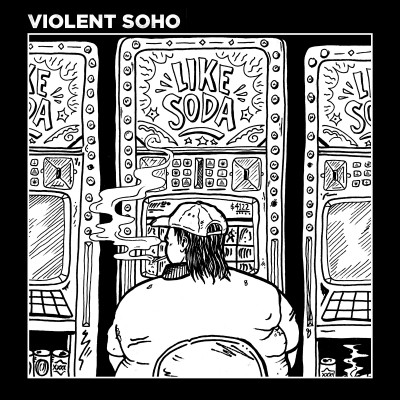