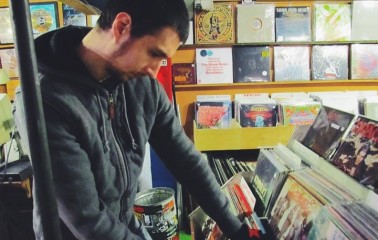 “My first true introduction to a Dine Alone artist was City and Colour. I was working for UMG in New York and would often go into my buddy Mark’s office to lay down on his office couch and listen to old Long Island hardcore bands we both grew up on. Also, lots of Snapcase. LOTS of Snapcase. It was winter of 2006 and snowing, cold and dismal outside. Mark said he wanted something to fit the mood of the weather and the grey-ness outside and put on “Comin’ Home”. I sat there in absolute awe. I couldn’t believe this was Dallas from AOF. I made him play it five times in a row. Finally he ripped the CD for me so I could listen to it on the way home, as it was only available as an import and not on iTunes US at the time. I ordered the CD off Amazon that night (had to be $30 or so). I still get chills when I hear the opening chords. It’s easily one of my favorite songs.

I also remember putting it on as I was driving cross-country from NYC to San Francisco a few years later. As I was driving through the nothingness of Nebraska, “Coming Home” randomly came on one of my playlists and that lyric about “Nebraska not being worth shit” hit and I don’t think anything has ever lined up as perfectly as it did that day. 454 miles of nothing.”