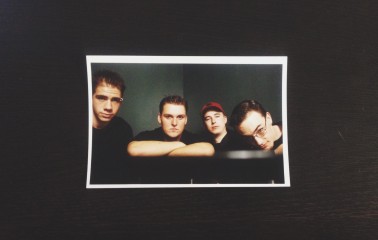 Unbeknownst to some, Dine Alone employee Mike Bell has a longstanding history with the label. Mike was a member of the iconic Ontario band Chore. Although Chore came and went before the fruition of Dine Alone, the band had a huge influence on DA employees and artists alike — including Dallas Green. Read the story of Dallas joining Chore for one last play of “The Hitchhiker,” as told by Mike Bell, below.

From 1995 to 2004, I was in a heavy alternative rock band called Chore. St. Catharines, ON was the first city in which us small town kids from Dunnville, ON ever found stages to play our music on. Firstly, there was Blue Moon Vintage Clothing, right downtown on St Paul St., which had a cafe in their attic where young local musicians and poets could easily get some stage time. The first time my brother, Chris, and I ever performed outside of Dunnville together, was in that upstairs cafe. Once Chris and I had formed Chore, we were hitting different stages all over town, most of which are now long gone ie. Gord’s Place, Out of the Past Vintage Clothing, The Vault, The Club, and most fondly remembered, The Hideaway. As the years passed, each of these venues dropped out of fashion or just out of the mix entirely, leaving a temporary void in the St Kitts indie scene, until a new little restaurant called The Mind Bomb decided to start hosting live shows. The Mind Bomb immediately became our ground zero in St Kitts. The mgr, a great guy named Igor, didn’t mind the fact that Chore knocked bottles of booze right off the bar shelves with the sheer sonic pull of our excessive volume, every. single. time. that we played there. If a Chore show ever happened at the Mind Bomb during which at least one bottle wasn’t acoustically forced from its’ perch, it just felt wrong.

It was at The Mind Bomb that we first met Joel Carriere. My best friend, ex-Chore and current Not Of drummer, David Dunham, recently refreshed me on it. One day, we arrived at the Mind Bomb for a very early slot on a mini-festival of sorts, comprised of a slew of thuggy hardcore and nu-metal bands. We were a bit late and decided to cancel, mostly out of respect for the scheduling and the fairly clear evidence that even if we’d rushed on stage and did our thing right then, we would have been playing to an empty, sunlit parking lot anyway. As we were getting ready to leave though, Joel approached Dave to introduce himself and let him know what a big fan he was. Chore had hit Joel’s radar by then as he was a scene fixture who was starting to promote great shows around the region. That quick little connection made the drive worth it. Joel would promote any and all Chore shows in St Catharines from that point forth.

A couple years later, Chore was gearing up to release our third record, The Coastaline Fire, on Hamilton’s own Sonic Unyon Records, so we called Joel up to see what he might like to do for our St. Catharines CD release show. What resulted was an amazing all-ages night of bands at the Niagara Arts Centre that included our close Hamilton comrades of heaviness, Shallow North Dakota, and a newish post-hardcore band from St Kitts called Alexisonfire. We’d previously met at least one of their members, Dallas Green, as he’d been coming out to see Chore at the Mind Bomb for some time by then. We’d heard of his great previous band, Helicon Blue, but I don’t believe we ever had the good fortune to actually share a stage with them, which was a shame as people had been telling us that we’d be great fit together.

– ASIDE – this brings to mind a memory of being at the Opera House in Toronto with David for a Queens of the Stone Age show (Rated R era, October 1st, 2000) and noticing a very familiar face standing right behind us. It was Dallas, who we still didn’t really know by name, but we KNEW that face and couldn’t help but turn around to ask him, ‘Hey, don’t we know you?’ He unassumingly held up his arms and said ‘I don’t know, do you?’ We all just awkwardly smiled at each other and went back to drinking in the rock supremacy that is QOTSA. I should ask Dallas if he remembers that… – ANYWAY –

That cd release show at the NAC was, hands down, the pinnacle of Chore shows in the Niagara region to that point. Shortly after the ‘touring cycle’ for The Coastaline Fire was complete, and we’d once again played to an average of roughly 10 to 15 people a night in halls and bars all across Western Canada and the North-Midwestern USA, I’d decided to throw in the towel and Chore soon dissolved. At the same time, Alexisonfire suddenly found themselves BLOWING THE F#CK UP all over Canada, thanks in no small part to the instant MuchMusic sensation that was the video clip for ‘Pulmonary Archery.’ As we were planning our last gigs, Alexisonfire asked if we would open up for them, right on our home turf in the Sonic Unyon Attic in downtown Hamilton, ON. We gladly accepted and had a great night. The Alexisonfire audience was very good to us. Once AOF were on stage, and tearing it UP, Dallas paused the chaos for a minute to say a few words to the crowd about how Chore had been an inspiration to him and his work and thanked us for being there. As sad as it was for us (Chore) to basically be admitting defeat and putting the permanent brakes on, it was such a great way to go out. Chore headlined our own proper final gig just a week or so later in the same room to a sold out swarm of friends and fans, some of whom even travelled from as far as the Midwestern US to be there….and that was that. Done. That was in the spring of 2004.

Skip ahead to the winter of 2010. Unbeknownst to the general public, myself included, Alexisonfire were now coming to the end of their amazing run, and Chore had actually just decided to reunite for a couple holiday season Hamilton shows, just because we could, really. On the second night of Chore’s two night reunion run at The Casbah (shout out to Brodie Schwendiman, longtime Chore booker in the Hammer), Joel C showed up with some bros to catch us back in action. Right after our set, Joel got right in Chris’s face and said that we HAD to be on a big Alexisonfire show he was putting on in St Catharines as an end of tour/homecoming/holiday extravaganza, which was only a week or two away. Cancer Bats, Moneen, and Billy Talent were already confirmed to be there, HUGE…but Joel just threw down and made sure that Chore would also be included. The timing was too perfect.

The full circle factor on that was spooky…almost a decade earlier, Alexisonfire were providing ‘local support’ at our little all ages hall show as we were winding down and they were warming up. Now, they were lifting us up onto the biggest stage and in front of the largest audience we’d ever played to, as they were winding down and we were enjoying a quick spell of rejuvenation. The icing on the cake, of course, was to have Dallas Green join us onstage that night to provide some incredible guest lead vocals on our most popular song ‘The Hitchhiker’. His voice could not have been a more perfect fit for the song…CHILLS! Thanks to a friend with a decent camera-phone on hand that night, and aside from The Hitchhiker’s official video clip (directed by the great Christopher Mills), it’s now one of the most watched youtube videos that I’ll probably ever be a part of.

Skip ahead 2 years. I’d just moved to Toronto from Hamilton after a decade of loving life in the Steel City, having worked at Sonic Unyon Records & Distribution and The Casbah during most of my time there. While looking around online during a shift at a temporary gold buying gig, I noticed that Dine Alone Records was looking for help. I managed to catch Joel’s attention on Facebook messenger and asked him if he’d maybe like MY help. He immediately put me in touch Lisa Logutenkow, the Dine Alone office queen mother, and that was that. I’ve been pimping records, making silly promo videos, carefully packing cartons of vinyl to ship abroad, and spreading the good word on Dine Alone Music ever since.

It’s been just over 20 years since my brother Chris and I first took to that café stage in downtown St. Catharines, and it’s been 10 years since Joel decided to build this thing that has kept us in touch and together, here in our late 30s. Chris and I have just started to play music together again, having formed ‘Customaries’ with our old pal, and OG Chore super fan, Nick Daleo on drums. Most recently, I’ve learned that one of the great Mind Bomb staffers from back in the day will soon be opening up a record shop in St. Catharines called Mind Bomb Records! So The Mind Bomb brand is swooping back into St Catharines to fill a void in the counter culture of the Garden City yet AGAIN…BANG! It’s so great to be able to look back like this, but even better to still have so much to look forward to, thanks all of these connections that have diverted my path accordingly and put me in the great spot that I’m in today. Cheers and congrats to Joel Carriere and my entire Dine Alone family!