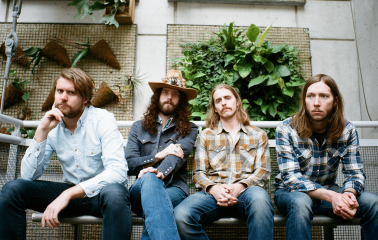 The Sheepdogs have released their cover of Lead Belly’s “Cotton Fields,” in the vein of one of their biggest inspirations, Creedence Clearwater Revival. A video of the band performing the song while rehearsing backstage during their recent international tour premiered earlier this week via AMERICAN SONGWRITER. Watch + share the video below. Purchase The Sheepdogs‘ new LP, Future Nostalgia, here.

Following the release of their album Future Nostalgia via Warner Music in Canada last October, The Sheepdogs have brought their raucous live set to tens of thousands of fans across the UK, Europe and North America, including many sold out shows. Beginning June 2 in Detroit, the band will embark on another North American run including festival dates in Edmonton, Winnipeg, Bala, Elora, Vancouver, Fredericton and the CMA Music Festival in Nashville. See below for a full routing.  Keep an eye on thesheepdogs.com for more announcements.