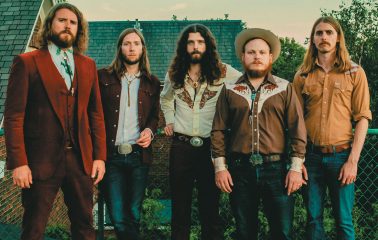 Saskatchewan’s own The Sheepdogs have been named as the “Record Store Day’s Champions of Canada.” The honour has been bestowed on the bearded rockers as part of the lead up to 2018’s Record Store Day, the eleventh year of the event which connects independent record stores to artists and vinyl enthusiasts; this year it takes place on April 21, 2018. The Sheepdogs are the first band to ever be named “Champions of Canada,” and join notables Elton John (2017 RSD Champion of Great Britain), Jack White (2013 RSD Ambassador) and Dave Grohl (2015 RSD Ambassador) in celebrating independent record stores. To commemorate the announcement the band sat down with their record collections to reminisce about some of the most meaningful vinyl from their personal collections – fans can watch that video below. For all the details on Record Store Day, go to the website at recordstoredaycanada.ca.

For their contribution to Record Store Day The Sheepdogs will be releasing an exclusive pressing of the live performances of “Nobody” and “I’ve Got a Hole Where My Heart Should Be,” both of which were recorded at the YouTube Creator Space in Toronto. This pressing will be a 7” vinyl, and will only be available to Record Store Day shoppers. What’s more, the band will also be releasing the first ever vinyl pressing for their first two LPs, Big Stand and Trying to Grow. Fans should arrive early at their local record stores to pick these up, as quantities will be limited.

In addition to their work with Record Store Day, The Sheepdogs have just released their new album Changing Colours. The album was heralded by “I’ve Got a Hole Where My Heart Should Be,” which reached the top spot at rock radio to join the ranks of the bands #1 hits “Feeling Good,” “The Way It Is” and “How Late, How Long”. The Sheepdogs are returning to the road on a coast-to-coast 28 date tour from Campbell River, BC right across to St. Johns, NL. Tickets are still available for select dates, and can purchased here.

The Sheepdogs have been nominated for seven Juno Awards, including Rock Album of the Year nominations for their three latest studio albums. In addition to this, their albums Learn & Burn and The Sheepdogs have achieved Platinum and Gold status respectively. For all the latest on The Sheepdogs follow the band on Twitter, Facebook,Instagram or YouTube, or at thesheepdogs.com.

Record Store Day, the global celebration of the culture of the record store, takes place annually in April.