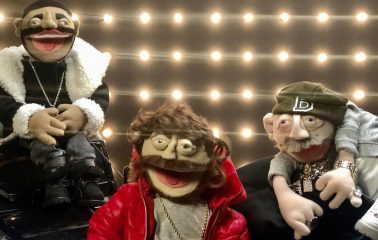 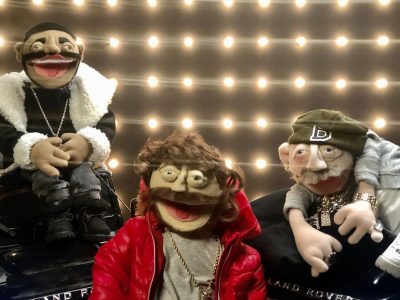 (January 17, 2020 – Toronto, ON) – Taggart & Torrens – featuring Jeremy Taggart, legendary rock drummer and multiple-JUNO Award winner formerly of Our Lady Peace, and Jonathan Torrens, 30-year veteran of Canadian TV (Street Cents, Jonovision, Trailer Park Boys, and Mr. D) – debut the first single from their much anticipated comedy album due this spring on Dine Alone Records. Blending Jeremy’s musical background with Jonathan’s comedic chops, says Taggart, “It’s been a blast performing a bunch of different styles in the studio, “The Score” is one of the hip-hop jams we’ve written. This album is a fun trip around the musical block, with plenty of laughs along the way.” “The Score” is now available to stream and purchase HERE.

To accompany the track, the dynamic duo have released a ballin’ video directed by Nicole Frosst featuring some beloved and legendary figures from the Canadian music scene…as puppets.

“Ever since we heard that Gordon Lightfoot and Drake live across the street from each other we’ve loved the idea of blending those two musical styles,” says Torrens about the video. “It obviously had to be a diss track, so our Gord going after someone as equally loved and respected as Bruce Cockburn made us laugh. Three kings of Canadianity in one song.”

The Taggart & Torrens podcast has amassed over 4M downloads and picked up the 2018 Canadian Comedy Award for “Best Audio Program”. A weekly cocktail of tales from the road and goofy party games, TnT is a celebration of “Canadianity” – a word Jonathan and Jeremy coined to sum up the nostalgic affection they have for growing up in this country. It is also the title of their recent best-selling book, Canadianity: Tales From the True North Strong and Freezing. Published by HarperCollins, the print edition charted at #4 on The Globe and Mail Bestsellers list while the audiobook hit #1 on the Audible Best Sellers chart.

More information on the new album will be announced soon.