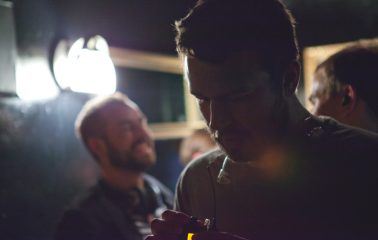 Long-running emo/pop punk staples Say Anything are headlining the BrooklynVegan/Dine Alone/Buzz Records SXSW showcase on Wednesday night at Swan Dive, and playing right after …And You Will Know Us By The Trail of Dead.

On March 13th, BrooklynVegan exclusively announced that Say Anything have signed to Dine Alone worldwide and have a new Will Yip-produced album coming out on the label! Here’s what band leader Max Bemis says:

“It is surreal to have a new home for Say Anything. It’s been a minute since that’s been the case and I’m totally excited that we’ll now be working with the wonderful Dine Alone Records. I’ve been a fan of the label for a long time and am full on stoked to release our new Will-Yip-produced LP with them. The record is a bit different from the last one (blah blah as always) and is going to be an involved, weird organism, but one I am glad to entrust to Dine Alone.”

Will Yip also worked on Say Anything’s 2016 album I Don’t Think It Is, which came out on Equal Vision (and featured members of Japanese Breakfast, The Hotelier, The Blood Brothers, and more).