Australian pop duo Oh Pep! recently released the first single “Doctor Doctor” off their forthcoming record, Stadium Cake, which CBC Music called “immediately catchy” as part of their Songs You Need To Hear feature, noting that the track “hits you right in the chest.” Now they’ve revealed another track from the album, “Bushwick”, which Consequence Of Sound calls “pop at its most kinetic.”

With three EPs under their belt since 2012, Oh Pep!’s debut LP, Stadium Cake, is a coming of age for the duo, who have been touring internationally since early 2015. The album will be released digitally, on CD and vinyl, June 24 on Dualtone / Dine Alone Records. Click here to pre-order. Oh Pep! will be on tour throughout the summer with Lake Street Dive, Basia Bulat, Lord Huron, and Nathaniel Rateliff & The Night Sweats, making a stop in Toronto on June 24 as well as performances at The Vancouver Folk Music Festival (July 15-17) and The Calgary Folk Music Festival (July 21-24).

Stadium Cake was recorded in Echo Lake, Nova Scotia in February and August of 2015 with producer, Daniel Ledwell. “It was such a joy to work with wunderkinds Oh Pep!,” says Ledwell. “When you have great songs and the creativity and talent to be innovative in the studio, it is hard not to have fun.” Oh Pep! claims Ledwell “introduced us to a lot of exciting new sounds. It was also the first time we’d multi-tracked and he made the process fun and easy. Working at Lake Echo was really inspiring.”

Hally and Emmerichs formed Oh Pep! while at music secondary school in Melbourne, Australia. Now both aged 24, Oh Pep!’s has a big year ahead in 2016. It will see them tour Europe for the first time supporting Lake Street Dive, a headlining trek across North America and a triumphant return to their native Australia. 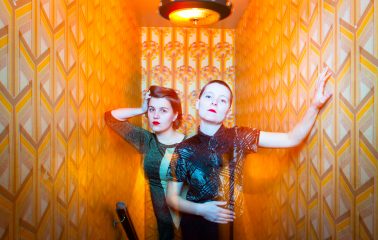