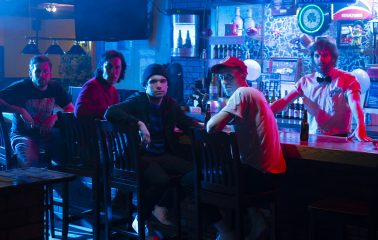 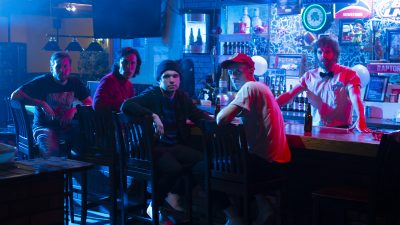 (July 25, 2019) – Ottawa-based rock and rollers New Swears release a new video for “Wheels” today that takes the viewer behind the scenes and highlights the remarkable performance they’re known for. The band shares that “touring can certainly be a magical rollercoaster ride. This song takes you on a journey with us. Enjoy, and keep those wheels rolling.” Watch HERE. The band’s self-produced, fourth full-length album Night Mirror is available to stream HERE via Dine Alone Records. Purchase HERE. New Swears is set to perform a special Toronto release show on August 16 at Monarch Tavern with Teen Archer and Man Crush. Tickets are now on sale HERE.

With Night Mirror, New Swears remain entrenched in their punk roots while diversifying their sound, as they seamlessly venture into campfire style country feels on tracks like anthemic A-side “Concrete Cowboy” (video HERE) and B-side “Wheels” showcasing the strength of their vocal harmonies and introducing pedal steel guitar & harmonica. Atwood Magazine heralded that “…they approach every song and album with raw passion, grit, and a charismatic attitude that allows them to keep standing out and remain unapologetically rock.” “Rolling Stone” is in full rotation on Sirius XM’s North Americana channel and the classic ‘New Swearseque’ “Bon Voyage” video can be enjoyed HERE. Their sense of humour and adventure prevails in their videos for Angel and Bells Corners.

Night Mirror sees New Swears continuing to stay true to the DIY ethic that has given them the charm we’ve all grown to love. With this album being recorded and produced by New Swears in their home studio The Clubhouse Recording Club, it’s evident from their music and videos that they simply love creating. They’re showcasing some of their most finely crafted songs to date with no signs of slowing down any time soon. Their slight departure from critically acclaimed 2017 Dine Alone release And the Magic of Horses shouldn’t surprise anyone who follows them. One thing that has been consistent since the band’s debut is their unpredictability. New Swears’ versatility and love of music have taken their sound across genres blending a variety of styles. There are no boundaries for what this band will take on; they’re not afraid of exploring new territory. Night Mirror explores topics of inner-reflection and ushers in a 5th member on keys/piano.

Formed in Ottawa, ON in 2012, New Swears consists of four original members Stoney, Nick Nofun, Sammy Scorpion, Beej Eh, and new addition Handsome Mike. The band has earned a rep for their riotous performances, releasing two DIY LPs, and raging across Canada, the US, and Europe. Sharing stages with like-minded rock ‘n’ rollers Diarrhea Planet, Black Lips, and PUP, their shows became infamous for explosions of silly string, confetti, and human pyramids. In late 2016, New Swears signed to indie-powerhouse Dine Alone Records releasing their “Brand New Spot”/“Sugar Heavy Metal” 7” followed by their studio album, And the Magic of Horses in 2017 which received 9/10 in Exclaim! But who are New Swears, really? A heartfelt and eye-opening video Bio about the band narrated by artist Buddy Smiles is available HERE.