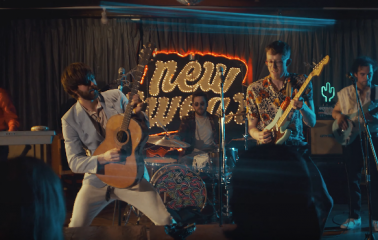 (May 14th, 2019) – Ottawa-based rock and rollers New Swears premiere the video for anthemic a-side single “Concrete Cowboy” via Atwood Magazine HERE, heralding the track as, “A bluesy rock jam with sweet whiffs of country spirit…a feel-good anthem ready for singalongs and celebrations.” The track is available to stream and purchase on May 16 as part of a double single with b-side “Wheels” on DSPs HERE. Both tracks are from their upcoming album Night Mirror dropping on June 13 via Dine Alone Records. Their record release shows are slated for June 15 in Ottawa at Babylon Nightclub and July 19 in Toronto at Lee’s Palace.

Like many great Westerns, “Concrete Cowboy” chronicles the true story of a protagonist’s misadventures abroad. Explains the band, “It was a cold evening in late September and we were on tour playing a show in Hamburg, Germany. The show was packed and afterward we hung out with the locals, had some laughs, and stayed out until the crack of dawn. We crashed at the promoter’s house down the street from the venue and when we woke up the next day, we noticed that one of the bedspreads laid out for us was still untouched. Our drummer, Stoney, never made it back home! After a couple of panicked hours exhausting every possible angle we could, we were faced with the reality of reporting him missing and canceling the next night’s show. That is, until our driver Goose went to grab our van…and wouldn’t you know it, he found the little cowboy curled up, far from the venue, half-frozen, asleep on the street.” Concrete Cowboy Stoney shares his perspective on Atwood Magazine HERE.

Self-produced, New Swears’ fourth full-length LP, Night Mirror, could be considered a bit of a departure from their critically acclaimed 2017 Dine Alone release And the Magic of Horses but that shouldn’t surprise anyone who follows them. One thing that has been consistent since the band’s debut is their unpredictability. Their versatility and love of music have taken their sound across genres blending a variety of styles. There are no boundaries for what this band will take on; they’re not afraid of exploring new territory. While still holding true to their punk roots they continue to diversify their sound as they seamlessly venture into campfire style country feels on tracks like “Concrete Cowboy” and “Wheels” showcasing the strength of their vocal harmonies and introducing pedal steel guitar & harmonica. The upcoming album features some of the band’s most finely crafted songs, exploring topics of inner-reflection and ushering in a 5th band member on keys/piano.

Formed in Ottawa, ON in 2012, New Swears consists of four original members Stoney, Nick Nofun, Sammy Scorpion, Beej Eh, and new addition Handsome Mike. The band has earned a rep for their riotous performances, releasing two DIY LPs, and raging across Canada, the US, and Europe. Sharing stages with like-minded rock ‘n’ rollers Diarrhea Planet, Black Lips, and PUP, their shows became infamous for explosions of silly string, confetti, and human pyramids. In late 2016, New Swears signed to indie-powerhouse Dine Alone Records releasing their “Brand New Spot”/“Sugar Heavy Metal” 7” followed by their studio album, And the Magic of Horses in 2017 which received 9/10 in Exclaim! But who are New Swears, really? A heartfelt and eye-opening video Bio about the band narrated by artist Buddy Smiles recently surfaced and is available HERE. 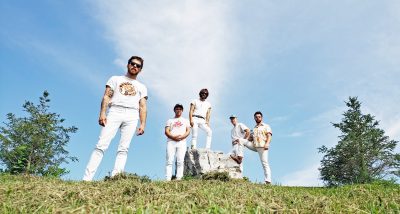