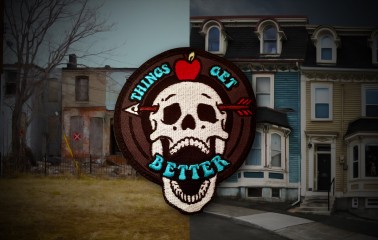 Rock n’ roll fans around the globe can click HERE to check out the exclusive worldwide premiere of Monster Truck’s brand new track, “Things Get Better” on RevolverMag.com. The bluesy, soulful song is taken from the band’s forthcoming sophomore album Sittin’ Heavy, which is set for release on February 19th.  Of “Things Get Better” Monster Truck’s frontman/bassist Jon Harvey commented, “The song is about the current state of the world.” Guitarist Jeremy Widerman added, “It’s a message of hope in the face of real adversity that seems to be around every corner these days.  Not just a reminder to take nothing for granted but also to be aware that through struggle and perseverance comes triumph.”

Sittin’ Heavy is available now to pre-order via the band’s webstore, Dine Alone webstore and iTunes. Those who pre-order the record via iTunes will instantly receive “Don’t Tell Me How to Live,” the anthemic track “The Enforcer” and “Things Get Better”. Produced by the award-winning Eric Ratz (Billy Talent, Cancer Bats), Sittin’ Heavy was recorded at Vespa Studios, Revolution Recording in Toronto and Monster Truck’s new jam-space studio.

In support of their new record, Monster Truck will be embarking on a Canadian headlining tour this winter. The tour which kicks off at Sugar Nightclub in Victoria on February 23, features stops in 11 Canadian cities. Due to public demand, the band has added a second show in Toronto at The Phoenix on March 12. Joining Monster Truck for their Canadian run will be British blues rock band The Temperance Movement. See below for all confirmed dates.