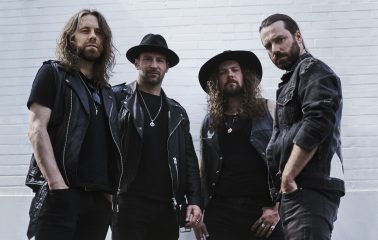 The Down and Dirty Club Tour Kicks off February 6 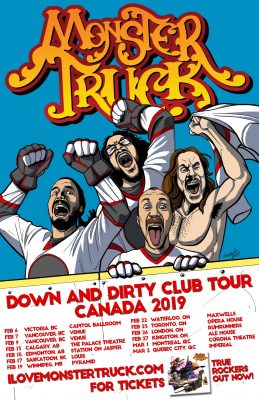 “Monster Truck have accomplished something that many try and most fail to do…This is a true triumph for Rock music that all should allow themselves the pleasure of experiencing.” – Rock N Load Mag – 10/10

“True Rockers should be considered a serious contender for another Juno award for the band.” – Hellbound

(October 15, 2018 – Toronto, ON) Monster Truck have just announced an intimate club tour in Canada for early next year. Kicking off at the Capital Ballroom in Victoria on February 6, The Down and Dirty Club Tour sees the band hitting 12 Canadian cities, including a Toronto play at The Opera House on February 23. All dates are in support of Monster Truck’s critically acclaimed new album True Rockers, available now through Dine Alone Records in Canada. Tickets for the tour will go on sale to the general public on Friday, October 19 at 10AM LOCAL time. For a list of confirmed dates, please see below.

“When we finally got to headline Canada again we wanted to get up close and personal for the fans that stuck by us these last 10 years and getting back to the clubs has been a goal for us for a while. The sweat, booze and smell of the clubs is so visceral, we wanted that feeling again,” comments lead vocalist Jon Harvey.

Drummer Steve Kiely continues, “This is the best way for our Canadian fans to get a first taste of our latest album played live; RIGHT IN YOUR FACE! There’s a certain energy you feel seeing a rock band in a small club that simply can’t be replicated on the big stages. This is an opportunity for us and our fans to have fun and get back to our roots.”

Following their Canadian club show run, Monster Truck will join the Trailer Park Boys for their Out of Jail and Setting Sail Caribbean Cruise from March 6-10, 2019. The cruise will see the band travel from Tampa to Great Stirrup Cay, Bahamas.

Hamilton, Ontario’s prodigious sons Monster Truck are one of the biggest groundswell stories in Canadian rock in the past decade, with numerous Top 10 Canadian Rock radio hits, a 2013 Juno Award for “Breakthrough Artist of the Year”, a 2014 Juno nomination for “Rock Album of the Year” and countless tours under their belt. Their critically acclaimed sophomore album Sittin’ Heavy debuted at #3 on the Top 200 Canadian SoundScan chart and featured Top 5 Canadian rock radio hits “Don’t Tell Me How to Live” and “For The People”, as well as the ultimate hockey anthem “The Enforcer”, which garnered attention from legendary hockey commentator Don Cherry. The track was featured in the opening montage and second intermission of Hockey Night in Canada and would go on to be used as the goal song for the Toronto Maple Leafs.

Their debut full-length, Furiosity, which recently received Gold certification in Canada, debuted at No.13 on the Top 200 SoundScan chart, hit #3 on the German Rock/Metal chart and earned the band two #1 singles at Canadian rock radio. The album also landed the band features in countless tastemaker publications, as well as a Bandit Rock Award nomination for ‘International Breakthrough Artist’ in Sweden.

Monster Truck’s unabashed dedication to creating killer riffs and putting every ounce of themselves into their show night after night has created quite an impression not only with fans across the globe, but iconic rock bands as well. The band has been championed by the likes of Slash, Alice in Chain’s Mike Inez and Twisted Sister frontman Dee Snider. Monster Truck has toured extensively in Canada, the U.S, Europe and the UK, alongside such iconic acts as Alice in Chains, Slash, Rob Zombie, Jane’s Addiction, Nickelback, Deep Purple, ZZ Top, Buckcherry, Alter Bridge, Volbeat, The Temperance Movement, Rival Sons, and VISTA CHINO (Kyuss) and has performed at a number of popular festivals including Download Festival, Bonnaroo, Welcome to Rockville, Rock on the Range and Edgefest. 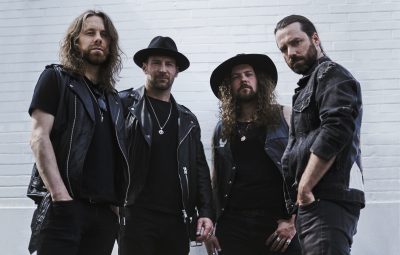