To Celebrate the Anniversary, Tim Burgess of The Charlatans is Featuring Source Tags & Codes on his Twitter Listening Party with the Band at 4pm ET/9pm UK 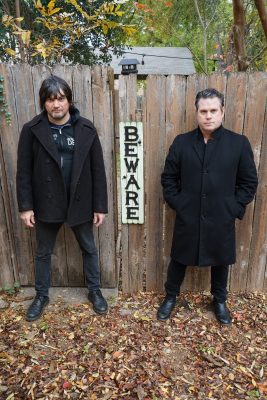 New York, NY – 11 May 2020 – May 12, 2020 marks 25 years of …And You Will Know Us by the Trail of Dead to the exact day and the City of Austin and the Lone Star State of Texas has recognized this special day and significant accomplishment.

Since 1995, your Austin-based band has been a staple in the renowned Texas music scene. Your thrilling live performances and unique style of art-rock punk have entertained countless listeners and fans around the world, and your creativeness and dedication as musicians and entertainers highlight the best of the Lone Star State. – Greg Abbott, Governor of Texas

In addition to gaining recognition from the Lone Star State, the band is joining Tim Burgess of The Charlatans for his nightly Twitter listening party (timstwitterlisteningparty.com) where he’ll feature Trail of Dead’s 2002 seminal LP Source Tags & Codes tomorrow, May 12 at 4pm EST/9pm UK time.

…And You Will Know Us by the Trail of Dead played their first show on May 12th 1995 and swiftly became as well known for trashing their instruments as for the giddy thrill of their wide-eyed noise-rock.

We played a small cafe on Congress Ave. to about 8-10 people as a two-piece band…a tiny drum kit that we bought off a cop and a really deafening guitar set up that included a pedal called The Death Metal Pedal that was so volatile and nasty.  I believe that we were way too loud, so our friends watched us play from the street. The owner was so drunk and coked up…he was really annoyed by our racket…but that little show helped us meet a fellow band named Glorium who would then take us under their wing and help us as we navigated the sketchy grimy bars of our little city of Austin Texas.
– Jason Reece, …And You Will Know Us by the Trail of Dead

They were in the midst of a world tour celebrating their new album and 25-year anniversary when Covid-19 hit.  Trail of Dead’s Jason Reece and Conrad Keely returned home to Austin in early March following an EU/UK run only to go into immediate quarantine.  The spring US leg of the tour has been rescheduled for July – confirmed dates below. 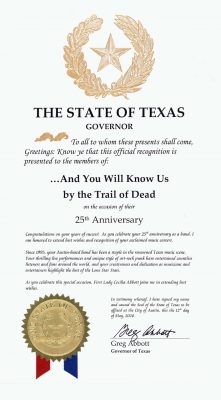 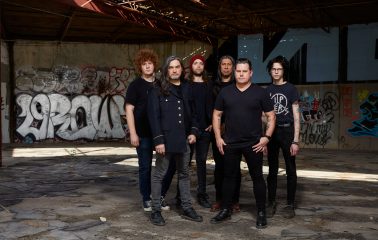