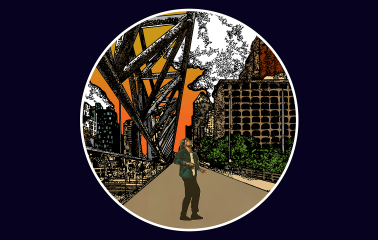 Acclaimed Texas singer-songwriter Matthew Logan Vasquez’s new album, LIGHT’N UP (Dine Alone), is out today. To celebrate, he shares a great new video for the scorcher, “Vacation.” Shot on location in Sherborn, MA, outside of Boston, the clip features local townspeople — including Laila Lockhart Kraner from the hit TV series Black-ish — taking on lead vocal duties as if their lives depended on it, hinting at internal conflict lurking within the hedonism.

“When Matt sent me the track, I immediately saw a lot of different characters; there’s a real cinematic quintessence to the song,” says video director Michael Parks Randa. “I thought it’d be fun to shoot at all the spots I grew up going to in and around my hometown of Sherborn, MA. The elementary school my siblings and I went to as kids and that my brother now works at. The program for folks with disabilities that my parents have run for over 45 years. The diner. The mechanic. The library. The fire station. The brewery. My brother went around and locked down all the locations and found that many locals wanted to actually be in it, which really brought an authenticity to the video. So the video is comprised of real work class people, students, my family, friends, and a few talented actors to help round it out. It was the perfect way to come home.”

The song and it’s b-side, “I Love My Boy,” got their premiere via Relix magazine recently.

“‘Vacation’ is about certain ironies in my life,” says Vasquez. “First that I travel the world for work, and save all my money so that I can stay home. Also most of my relationships are best described as ‘weak ties.’ I’m fortunate to have lots of great friends living all over the place, but it’s hard to develop past our first experiences. This song makes me want to pick up the phone and call old tour pals.”

As for “I Love My Boy,” Vasquez says, “I was sitting in our home FaceTiming with my wife and son (who had gone ahead of me to Norway a couple weeks prior). I had to stay back and record this album before I’d lost access to my studio. On the call I was overwhelmed by sadness that they weren’t with me. Tears welled up in my eyes at the end of our call and I went straight over to the piano and wrote ‘I Love My Boy.’”

LISTEN TO “I LOVE MY BOY”

Currently residing in Oslo, Norway, Vasquez will celebrate LIGHT’N UP on a truly epic world tour, with North American headline dates beginning May 7at Oklahoma City’s Tower Studio and then continuing into the summer. Full details – including European dates, ticket information, and additional updates – can be found at matthewloganvasquez.com.

ADDITIONAL DATES TO BE ANNOUNCED