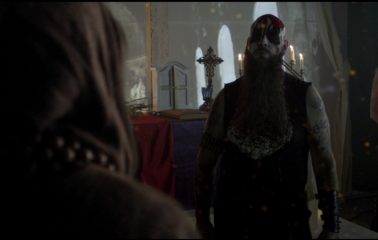 Explosions, a demonic monk, a sexy woman performing sacrilegious acts upon an alter and metal rock heroes playing amidst the pews of a chapel are all some of the humorous, discordant images in the campy horror movie style video.

The album track itself features the guitar work of Page Hamilton (Helmet) and vocals from Josiah Johnson (The Head and The Heart) but is played out in the video by Pete Majors and Sandor G.F. of Harassor, Erik Kluiber of Ironaut on bass and bandmate Eli Santana, also of Holy Grail. Mendel came up with the concept of the video when he was in the process of putting a touring band together for Lieutenant.

“I was in the brackish zone between a solo project and a band and wasn’t sure of what the identity of the band would ultimately be,” explained Mendel. “I thought, ‘Why not play that out by creating a performance video using the 100% incorrect musicians, in this case a black metal band?’ I texted the idea to a friend of mine, Jim Rota, who was a producer on the ‘Sonic Highways’ project, and also fronts the metal band Fireball Ministry. He responded with a photo of Pete Majors covered in stage blood, on stage with his band Harassor”

“Believe the Squalor” is off Lieutenant’s debut solo record If I Kill This Thing We’re All Going To Eat For A Week, which was released in March 2015 and is now available on vinyl. Click here for direct vinyl and merch and here for iTunes.