“…a deeply felt record, moving and unsettling in the best possible way. Lyrically, it’s the best thing Powell has done, finding surprising ways into universal themes like longing, alienation, and confusion while still managing to emotionally devastate.” – The AV Club

“…their most emotionally powerful and vulnerable work to date…Powell and the band have significantly restructured their sound, leading to Powell’s lyrics taking centre stage, giving their voice the full range of space and volume it deserves…Of course, Powell can still plug in and rip up a fretboard when they want to” – Exclaim! (8/10 stars)

“Dynamic, dreamy, and absolutely intoxicating, ‘Weight of That Weekend’ has this mysterious way of grabbing our senses and pulling us in – far deeper than we thought possible.” – Atwood Magazine

All 11 songs on Indistinct Conversations were written by bandleader Elizabeth Powell, who also produced and arranged the tracks together with bandmates Mark “Bucky” Wheaton (drums/keys) and Christopher McCarron (bass). The album is a dreamier, more acoustic-driven work than prior Land of Talk releases; it was recorded in Wheaton’s home studio, and has the intimacy of a private document. The songs were created as a therapeutic space where Powell could retreat from the world.

Yet Indistinct Conversations is not an album of numbing out. By drawing back into their interior world while creating Indistinct Conversations, Powell was able to emerge with a stronger sense of self — and more willingness to confront the oppressive structures of the world. This process included embracing their identity as a non-binary femme who uses the pronouns she/they, and engaging directly with the trauma inflicted on them as a “woman-presenting human.”

As Powell stepped into a more authentic sense of self, they increasingly felt comfortable saying more with less, cutting whole swaths of lyrics down to oblique, minimal statements and dropping to a more low-key, almost speak-singing style inspired by Kurt Vile, Courtney Barnett, or Bill Callahan. “I used to think that as a ‘female vocalist,’ as a ‘female singer,’ like…‘gotta sing high! You’ve really got to blow your load in the chorus and show people how high you can go,’” Powell explains. “Now it’s like, What if I get to the chorus and I don’t feel like singing? What if I just kind of want to get something across in very few words? This record is me being a lot more true to what I want to say and how I would want to hear it, not really trying to cater to any preconceived notions of what a woman is ‘supposed’ to sound like.”  That radical self-acceptance, the ability to speak in one’s own voice, is the hallmark of Indistinct Conversations. By digging deep, Powell has found a certainty we all deserve: the realization that their own voice is enough.

Other Praise For Indistinct Conversations:

“One of the more underrated and dependable outfits in indie rock…. Indistinct Conversations gestures toward direct, even more confident songwriting than before. Confronting oppressive power structures, manipulative abusers, and their own place, Powell charges ahead with propulsive swells and the always-intricate guitar-work.” – Mic

“These subtle but confident, sneakily catchy songs reaffirm that Land of Talk is as relevant to the singer/songwriter movement of the 2010s and 2020s as they were to the noisy indie rock scene of the 2000s when they first emerged.” – All Music 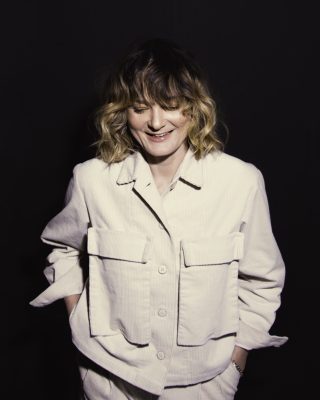