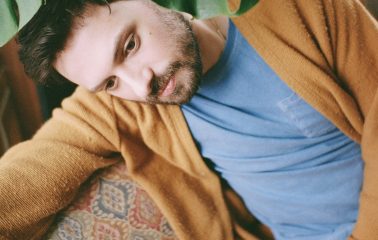 Along with the announcement, “Stay​”, the lead single and title track from the debut EP premiered via BrooklynVegan along with a music video shot by Vanessa Heins which you can watch below.

In Thomson’s words, “‘Stay’ is a plea – it’s a simple word that can unlock an incredible amount of vulnerability in the person asking it. Unfortunately by the time we have to ask someone to stay, we usually already know the answer. This song is about trying to change the inevitable, too little too late – and having to deal with it.”

Stay is a survey of Drew as a solo artist – the songs being a culmination of his experiences focused heavily on family, love, death, excess, and longing. Having faced his unique share of ups and downs, Drew Thomson has an inimitable ability to tell stories that, while seeming outrageous and not at all relatable, also feel deeply personal to the listener. This side of Thomson has made itself clear on Stay through Canadiana storytelling Rock and Roll reminiscent of Bruce Springsteen, Matthew Good, The Hold Steady, and Jonathan Richman.

Still packing a punch of the charisma that got Single Mothers noticed by Pitchfork, NME, Exclaim!, Brooklyn Vegan etc., The Drew Thomson Foundation lives in a conscious, self-reflective space. This project is intentional and the songs are more mature, telling of a story of a life being lived now rather than an obituary.

The Drew Thomson Foundation’s EP Stay will be available in full on May 4, 2018 via Dine Alone Records.