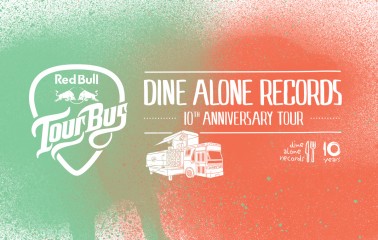 We’re getting ready to hit the road with the Red Bull Tour Bus in celebration of our 10th anniversary.  The ’67 GM transit bus that transforms into a ground shaking sound stage will host select FREE performances from coast to coast. The five-stop tour kicks off in Vancouver, BC, May 16 @ 4:00PM local time in the Gastown district, at the corner of Alexander and Water Street (click here for map). The Vancouver date will feature performances from Irish-born progressive-folk crooner James Vincent McMorrow, acclaimed explosive rock outfit Alberta Cross, haunting folk duo Dicey Hollow, and Vancouver’s own White Ash Falls. RSVP here to secure your spot to the free event. See below for streams and more info on each artist.

Making its debut on the Bus Tour is our touring record store, Wax on Wheels – an immersive record buying experience on the road equipped with charging stations and wifi.  Music lovers will be able to hang out under an awning-covered patio and get a unique opportunity to purchase titles from our back catalogue, as well as rare and limited releases and a special selection of DA merchandise.

James Vincent McMorrow
McMorrow’s acclaimed debut album ‘Early in the Morning’ reached number one, went platinum and picked up a Choice Music Prize nomination upon its release in 2010.  That record was the formative sounds of a songwriter who suddenly found people giving a damn.  His latest release ‘Post Tropical’ wipes the palate clean and is a stunning piece of work broadening the horizons for those who have come to know him.

Alberta Cross
Since 2005, Alberta Cross has been the songwriting project of Petter Ericson Stakee. The Swedish born singer/songwriter formed the band in London before relocating to their current home of New York City. With a revolving cast of musician friends,  Stakee and Alberta Cross have released three EP’s and 2 full length LP’s while playing such famed festivals as Coachella,  Lollapoalooza,  Bonnarroo,  Reading,  Leeds,  Fuji Rock and Splendour in the Grass. In the past 7 years Alberta Cross has toured the world while sharing stages with the likes of Neil Young,  Oasis,  Mumford & Sons,  Them Crooked Vultures,  Black Rebel Motorcycle,  Bat For Lashes,  The Shins, Phosophorescent and more. Alberta Cross plan to have a new album out in 2015.

STREAM “Get Up High“

Dicey Hollow
Haunting folk duo Dicey Hollow is a collaboration between long time friends Petter Ericson Stakee of Alberta Cross and Jamie Biden that came from writing sessions over the past two years in Mt. Tremper,  New York. Their forthcoming EP is due out Summer 2015.

STREAM “Howl At The Moon”

White Ash Falls
White Ash Falls is the moniker of multi-instrumentalist and one of Vancouver’s most sought-after sidemen, Andy Bishop. Bishop served time as a touring member of the rock band Yukon Blonde, as the live bassist for popsmith James Younger, and as a singer-guitarist in the atmospheric folk group Twin River. Having soaked up so many new sounds, Bishop rode a creative high when penning his own country-tinged material.  There’s no questioning his craftsmanship and musical smarts, just as importantly, he knows when to trust his instincts. It’s this balance of precision and spontaneity that shaped the sound of his most recent, sophomore album Over the Night.

STREAM “Over The Night“