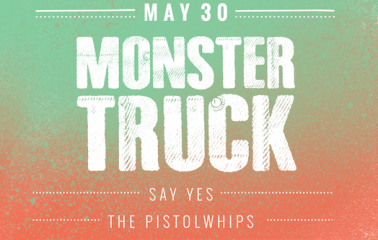 We’re getting ready to hit the road with the Red Bull Tour Bus in celebration of our 10th anniversary.  The ’67 GM transit bus that transforms into a ground shaking sound stage will host select FREE performances from coast to coast. The five-stop tour hits Saskatoon, SK, May 30 @ 4:00PM local time at 615 10 St. East (main intersection 10th St. East & Broadway Ave.) – click here for map. The Saskatoon date will feature performances from JUNO award-winning powerhouse Monster Truck, raucous rock trio Say Yes, and Saskatoon’s own The Pistolwhips. RSVP here to secure your spot to the free event. See below for streams and more info on each artist.

Making its debut on the Bus Tour is our touring record store, Wax on Wheels – an immersive record buying experience on the road equipped with charging stations and wifi.  Music lovers will be able to hang out under an awning-covered patio and get a unique opportunity to purchase titles from our back catalogue, as well as rare and limited releases and a special selection of DA merchandise.

Hamilton, Ontario’s prodigal sons Monster Truck set the world on fire with their debut record Furiosity.  Winning a Juno Awards for Breakthrough Group (2013), two number one Active Rock singles with “The Lion” and “Sweet Mountain River”, and world tours with the likes of Alice in Chains, Slash, Rival Sons, and Vista Chino to name a few.  The band are now in the studio putting the finishing touches on a new LP, and about to hit the road again as direct support to Nickelback in Australia this May, and UK / Europe this fall.

What do you get when you take three of Canada’s greatest modern rock musicians and put ‘em on stage together? An impeccably tight, high-energy, skull-crushingly loud set might just be an understatement. With a debut EP already out and a full-length on the way, Say Yes is a band you’ll want to see now so you can brag about it to your friends later.

STREAM “On Your Side”