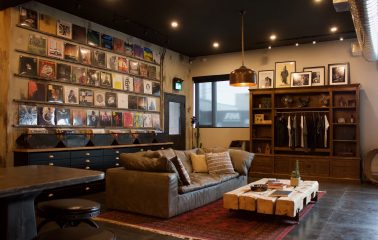 Says Dine Alone owner/founder Joel Carriere, “During high school leading into college, I worked at Sam The Record Man and ended my retail career with a brief stint at Sunrise Records before taking on Bedlam Management and Dine Alone Records full-time. Obviously, I must miss the old retail days because we are opening our doors to the public for the first time for a one-day only Pop-Up shop for Record Store Day on April 21 and I couldn’t be more stoked.”

One of the highlights available on April 21 will be the third instalment of the Dine Alone Switcheroo Series featuring Record Store Day Canada Champions The Sheepdogs and pals Yukon Blonde, each contributing their studio and cover versions of “I Wanna Be Your Man” & “I Really Want To Be Your Man”. The release available exclusively at the Dine Alone Records Store RSD Pop-Up will be sold as hand-stamped test pressings, limited to 100.

The label has also been hard at work creating limited colour variants from popular artists like City and Colour, and Alexisonfire which will be some of the first releases branded as Dine Alone Records Store exclusives. A limited number of copies will be available to purchase on April 21, 2018 with the remainder being randomly available later in 2018 when the store officially opens full-time. More details regarding the DA Store will be available in the coming months.