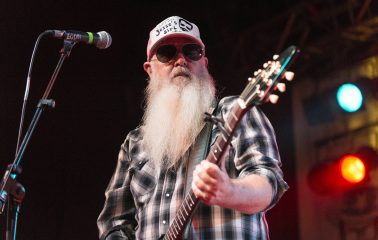 Today, Dave Catching, the co-founder of Queens of the Stone Age and guitarist in Eagles of Death Metal, earthlings? and Kyuss, has announced his first solo LP, Shared Hallucinations Pt. 1, with the premiere of the album’s first single, “Bought & Sold,” featuring Liela Moss of The Duke Spirit, on Billboard. The premiere is part of an interview with Catching about his remarkable career which has seen him work with some of the more notable figures in rock music history over the last 3 + decades, both as a musician and in his roles as a producer, engineer and proprietor of the legendary Rancha de la Luna studio in Joshua Tree where he has worked with Foo Fighters, PJ Harvey, Iggy Pop, Arctic Monkeys, Kurt Vile, Daniel Lanois and a host of others.

Built around a stop/start riff, the feel and tone of “Bought & Sold” will be immediately familiar to fans of Catching’s work in Eagles of Death Metal, and as Catching tells Billboard he initially intended for the song to feature vocals from EODM’s Jesse Hughes, before a chance interaction with Moss saw her contribute a vocal that made the song her own.

These kind of collaborations are the bedrock of the album, which bears the extended title Shared Hallucinations pt.1: Sonic Salutations from the Venerable Vaults of Rancho de la Luna 1972-1984, and which Catching describes as an homage to the “groovy” compilation albums like Nuggets: Original Artyfacts from the First Psychedelic Era, saying that it is intended to be listened to as different bands from different periods — evoking a similar spirit, but each possessing its own distinct tone and feel. In keeping with this concept the album features contributions from a wide array of Catchings friends and past collaborators including members of R.E.M., The Pixies, Afghan Whigs, Queens of the Stone Age, Screaming Trees, and A Perfect Circle.

To celebrate the release of the record Catching will be throwing a party in his hometown of Joshua Tree at the famous desert hideaway Pappy & Harriet’s on May 27th, where he will be joined by many of his collaborators from the album. Full details can be found below.

Shared Hallucinations Pt. 1 is due out on Dine Alone on May 27th. It is available for preorder here.