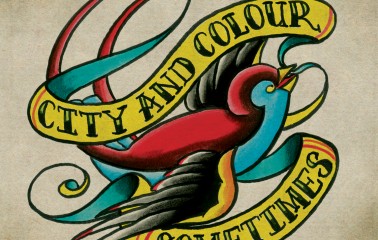 Ten years ago, on October 30 2005, we first heard “Save Your Scissors” on 102.1 The Edge. Our great friend Barry Taylor was instrumental to our success with Bedlam Music Mgmt artists and now with our first Dine Alone Records’ release of City and Colour’s ‘Sometimes’.

It was a really exciting time in our careers and probably my most favourite to date. We had no influence or pressure from the industry because we weren’t involved in it. We just did what we wanted to do because we could. It was innocent, pure and punk rock.

‘Sometimes’ was made for next to no money, many friends tossed in a helping hand, and it kick started everything in Canada and then around the world.

Thanks in no specific order to Garnet Armstong, Barry Taylor, Alexisonfire, Allan Reid, Tricia Ricciuto, David Porter, Sarah Norris, Telma Costa, Daniel Victor, George Stroumboulopoulos, Glen Vogelsang, Rob Ziff, Bedlam Society, Greg Below, Cristina Fernandes, The Hideaway, L3 and everyone in St. Catharines who let us know we were on to something special.

To celebrate the tenth anniversary of Sometimes, we’ve created new limited edition album bundles, now available on the DA10 store. The record will also be available for just $2.99 on both iTunes and Google Play for just 24 hours on November 1, 2015 only.

Thanks for picking up a record over the years, we hope you enjoy these new sets and continue to share Sometimes with family and friends.