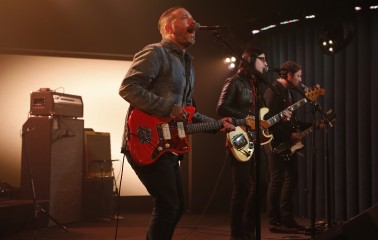 If you missed it on air, watch City and Colour make his live television debut playing “Lover Come Back” and “Wasted Love” from his new album, If I Should Go Before You, last night.

“Lover Come Back” is currently #13 on the AAA Radio chart in the U.S. Watch the official music video for the song here. If I Should Go Before You recently debuted #1 in Canada, City and Colour’s third consecutive chart-topper in our territory. In the U.S. the LP debuted at #16 on the Billboard 200 Chart, #3 on the Vinyl Albums Chart and #4 on the Independent Albums Chart and #5 in Australia.  In addition to widespread commercial success, the album continues to receive notable critical acclaim. The A.V. Club calls the album “alluring” and “breathtaking,” while AllMusic praises, “…a culmination of the sturdy pop sound he’s built up over the years that weaves through territories of dreamy indie folk, pastoral Americana, and soulful alt-rock.” Additionally, Paste Magazine describes the single, “Lover Come Back,” as “…a gorgeous, R&B-tinged torch song split evenly between joyous, earnest affection and yearning, lovesick sadness,” and Baeble asserts, “…reminded me how beautiful his voice can be.” Download it here.

City and Colour recently announced a Canadian tour for 2016.  The tour, in support of Green’s latest albumIf I Should Go Before You, kicks off in Kelowna on June 2, and wraps up in Montreal on June 20, 2016. Supporting City and Colour on the tour is Austin’s Shakey Graves. This is the first major national tour since 2014, which saw City and Colour headline Green’s biggest venues to date including a sold-out show at the Air Canada Centre in Toronto. See below for full routing including upcoming U.S., Australian and European dates.