Includes Performances At Vancouver’s Commodore Ballroom on February 18, 2023 and 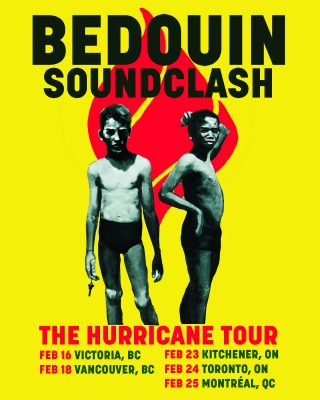 (November 30, 2022) – Toronto’s post-punk, world-beat duo Bedouin Soundclash are hitting the road in support of their latest record We Will Meet In A Hurricane. The run kicks off in Victoria on February 16 and features stops at Toronto’s Danforth Music Hall, Vancouver’s Commodore Ballroom and Montreal’s Le Studio TD. See below for more details. Tickets go on sale this Friday, December 2. Purchase HERE.

The JUNO and Platinum award winning duo featuring Jay Malinowski and Eon Sinclair recently sat down with Tom Power and CBC q to discuss the new record, the band’s noteworthy career, and longtime friendship. Listen to the fascinating and disarmingly honest conversation HERE.

Co-produced by Malinowski and Colin Stewart (The New Pornographers, Destroyer, Dan Mangan, Black Mountain), the buoyant and soulful tracks on We Will Meet In A Hurricane find the beloved duo digging back into their musical roots, steeped in the border-bending sounds the JUNO award winning and platinum selling band is known for.

Indeed, the parallels to Bedouin Soundclash’s earliest efforts come easy, sounding like a passport crowded with overlapping stamps on every one of its well-worn pages. Sinclair elaborates: “No matter where we are or what’s going on in either of our lives, if one of us picks up an instrument and plays something, everything else kind of dissolves and our shared focus becomes, ‘How can we turn this into something people want to hear?’” 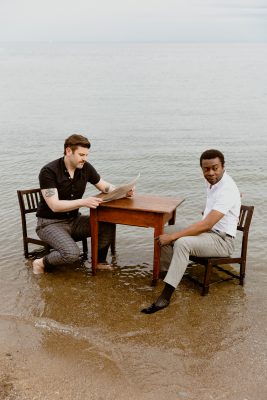 Formed in 2001 and named after Israeli dub artist/producer Badawi’s 1996 release, Bedouin Soundclash’s debut album Root Fire (2001) received critical acclaim before sophomore album Sounding a Mosaic (2004) sent the band global, culminating in a series of sold-out shows and festival appearances around the world. The album featured the smash hit single “When The Night Feels My Song”, produced by punk-hardcore royalty Darryl Jenifer of Bad Brains, and the band went on to pick up their first JUNO Award in 2006 for Canada’s Best New Group, along with numerous accolades around Europe.

The band’s previous offering, MASS, was co-produced by Bedouin Soundclash and legendary Philadelphia House DJ King Britt, along with musical direction from Ben Jaffe of Preservation Hall, ‘MASS’ spans two communities, recorded at Marigny Studio’s in New Orleans with the Preservation Hall Jazz Band, and in Vancouver at St. James Church with the children of the St. James Music Academy. While pulling from their old catalogue, the band journeyed further into New Orleans jazz, afro-pop, electronic and gospel, reflecting a creative rebirth influenced by the cities and musicians that surrounded them. 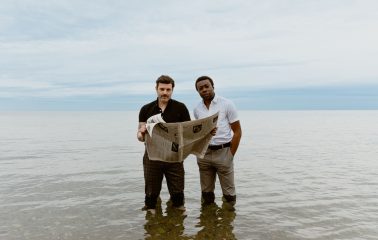