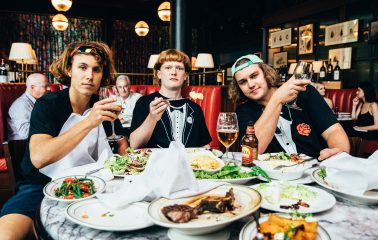 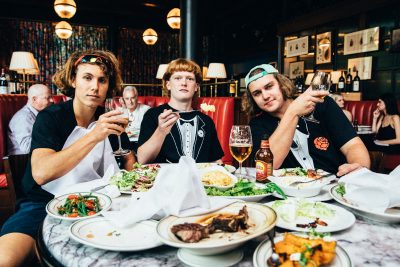 (Toronto, ON – March 6, 2020) – Australian punk band The Chats will release their debut album, High Risk Behaviour, on March 27th via Bargain Bin Records/Cooking Vinyl Australia, supported by Dine Alone Records in Canada. Pre-order the physical album HERE and on DSPs HERE.  Ahead of their North American tour, which kicks off next month, they present a new single, “Dine N Dash”, and its accompanying video. Following lead single “The Clap”, “Dine N Dash” is fierce, funny, and sweaty. The video, directed by Matt Weston, finds The Chats in an unfamiliar environment, eating a succulent steakhouse meal while embracing the poor status of their wallets and outright brazenness to get a decent feed. Watch the “Dine N Dash” video HERE.

“We filmed at Walter’s Steakhouse in Brisbane,” says Josh Price. “It was the best steak I’ve had. Definitely gave the Bowlsie a run for its money. No mushy gravy though.” Eamon Sandwith adds: “Ya know you’re in a fancy restaurant when the chips and salad aren’t included.”

Watch the eye-watering video for “The Clap” HERE

The Chats – made of Eamon Sandwith, Matt Boggis, and Josh Price – formed in 2016 while still in high school. Since then, they’ve released a self-titled EP in 2016 and 2017’s Get This In Ya EP, and have accrued a fanbase that includes Dave Grohl, Queen of the Stone Age’s Josh Homme, and Iggy Pop – the latter two who asked the band to open on their respective Australian tours. And despite being the subject of a record label bidding war, they’re releasing High Risk Behaviour on their own label (Bargain Bin Records). It’s indicative of a band that has embraced DIY culture since day one. Their determination to do things “our way” extends to their music, which is why High Risk Behaviour delivers everything you’ve come to love from The Chats – only more of it – and confirms their status as Queensland’s greatest ever export.

To create High Risk Behaviour, the band worked with engineer Bill Gardner in his studio on the Australian coast. It took nearly 18 months to finish and several, quick-paced sessions. “If we’d just done a week and slogged it out we could have had an album before now but we just kept going in there and making newer and better songs so it’s hard to put a stop on it,” says Sandwith.