Reflect on White Privilege, Racism and Misogyny with New Track

“Complicit” is now available to stream and purchase via DSPs HERE. Also available is a standard Black 7” vinyl with a limited pressing of a Translucent Red variant randomly inserted throughout stock quantities. Along with the 7” vinyl, AOF will have a new “Complicit” inspired t-shirt designed by graphic artist Jeremy Dean, best known for his “Wonders of Black Flag” designs. Both music and merch can be found HERE.

Says George Pettit about the new track, “‘Complicit’ is about recognizing the unfair advantages that we are afforded as white, heterosexual males. It’s about rejecting regressionist ideas of racism, misogyny and hetero supremacy. It’s about accepting that there is no freedom and no future in a world that is not inclusive.” 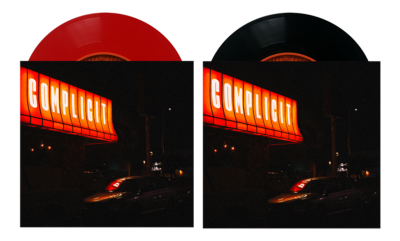 Alexisonfire are set to begin tour next week with shows kicking off in London (UK) on June 1 followed by stops in New York, Los Angeles and Toronto. One of two dates at each The Wiltern in Los Angeles,  Terminal 5 in New York and Budweiser Stage in Toronto are SOLD OUT. Joining the band are featured support acts Chastity and Child’s Pose in London (UK), Angel Du$t and Drug Church in New York City and Drug Church and The Dirty Nil in Los Angeles. In Toronto, Glassjaw and The Dirty Nil will perform the first night at Budweiser Stage, with Quicksand and Moneen filling in as support for the second night.

In the words of George Pettit, “These are all bands we know and respect, and think are rad. Make sure you come early!” See below for ticket links.

Alexisonfire premiered the official video for “Familiar Drugs” last month, teaming up with Michael Maxxis who directed their personal favourite AOF video for “The Northern” and City and Colour’s “Fragile Bird”, “Thirst”, and “Lover Come Back”. Watch + share “Familiar Drugs” HERE. The band recently put on a spirited performance and gave an in-depth, candid interview at House of Strombo which is now available. Watch the House of Strombo performance HERE and the full interview HERE.

Alexisonfire has partnered with PLUS1 so that $1 from every ticket sold will be donated to Indspire to build a brighter future for Indigenous students. See below for details on all show dates. To purchase tickets for the remaining upcoming shows, visit theonlybandever.com.

Hailing from St. Catharines, Alexisonfire rose up out of the Southern Ontario underground in late 2001, to become one of the most successful indie bands out of Canada. The band’s success also reached far beyond Canada’s borders. AOF released four hugely successful studio albums, Alexisonfire (2002), Watch Out (2004), Crisis (2006), and Old Crows / Young Cardinals (2009). Crisis debuted at #1 on the Top 200 Soundscan chart (Canada), and Old Crows / Young Cardinals debuted at #2, and charted at #9 on the US Billboard Independent Album chart. Watch Out helped earn the band New Group of the Year at the 2004 JUNO Awards. All four albums achieved Platinum certification in Canada.The band also topped charts and graced several notable music magazine covers internationally (Kerrang, Blunt, Big Cheese, Canadian Musician, Exclaim!). AOF’s sold-out 10th Year Anniversary Farewell tour in December 2012 touched down on four continents in 24 days, illustrating how meaningful the band still is to their legion of fans around the world. Alexisonfire also has the distinction of being one of a handful of Canadian artists to perform two consecutive nights at the iconic Toronto venue alongside City and Colour, Drake, The Tragically Hip, and Sarah McLachlan.

Indspire is a national Indigenous charity that invests in the education of Indigenous people for the long-term benefit of these individuals, their families and communities, and Canada. Indspire’s vision is to enrich Canada through Indigenous education and by inspiring achievement. In partnership with Indigenous, private and public sector stakeholders, Indspire educates, connects and invests in Indigenous people so they will achieve their highest potential.

PLUS1 is an initiative that channels the collective energy of a concert to catalyze social change. By partnering with performing artists, PLUS1 raises and grants millions of dollars to high impact nonprofits addressing our most serious global challenges around Access, Equity, and Dignity. The work begins with a $1 per ticket add-on that makes fundraising simple and seamless. Beyond the dollar, PLUS1 supports artists as educators and advocates, fuelling their passion, reach, impact. To date, PLUS1 has raised and granted over $7 million, and served as the connective tissue between over 100 artists, millions of their fans, and 100s of leading social justice organizations tackling global injustice.