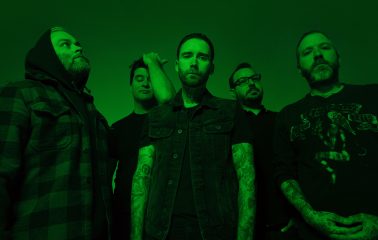 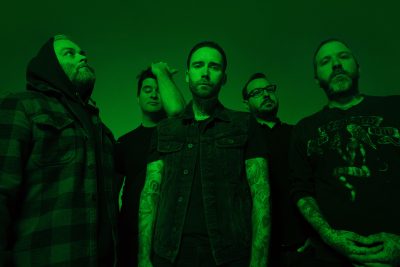 “the band fully unsheathes a sharp edge of sludge metal that they only hinted at before.” – ​Revolver

(February 22, 2019) – Due to overwhelming demand, iconic rock band​ ​ALEXISONFIRE​ has announced a ​2nd show at Budweiser Stage on June 16, 2019​. The performance slotted for June 15 is now sold out. The band has the distinction of being one of a handful of Canadian artists to perform two consecutive nights at the venue alongside ​City and Colour, Drake​, ​The Tragically Hip​, and ​Sarah​ ​McLachlan​. The first of two dates in Los Angeles and New York are also sold-out. ​To purchase tickets for the remaining upcoming shows, visit theonlybandever.com​. See below for all show details. ​Stream “Familiar Drugs” now ​HERE​.

A special vinyl pressing is available to pre-order as a single-sided 7” vinyl with a laser-etched b-side. A limited edition glow-in-the-dark variant will be randomly inserted throughout the entire pressing of black vinyl stock. Along with the 7”, AOF will have new “Familiar Drugs” inspired merchandise on their official storefront ​HERE​.

Says George Pettit about the new track, “‘Familiar Drugs’ is about recognizing you need to make a change in your life, being presented with the opportunity to make that change, and then choosing to do the same thing you always do. It’s about something very specific to me but it can be taken literally or interpreted in any number of ways. Most people have something in their lives they can’t quit, substances, unhealthy relationships, lethargy, self righteousness, a job they hate. ‘Familiar Drugs’ is about choosing comfort over self betterment.”

Hailing from St. Catharines, Alexisonfire rose up out of the Southern Ontario underground in late 2001, to become one of the most successful indie bands out of Canada. The band’s success also reached far beyond Canada’s borders. AOF released four hugely successful studio albums, ​Alexisonfire ​(2002), ​Watch Out ​(2004), ​Crisis
(2006), and ​Old Crows / Young Cardinals ​(2009). ​Crisis ​debuted at #1 on the Top 200 Soundscan chart (Canada), and ​Old Crows / Young Cardinals ​debuted at #2, and charted at #9 on the US Billboard Independent Album chart. Watch Out ​helped earn the band ​New Group of the Year ​at the 2004 JUNO Awards. All four albums achieved Platinum certification in Canada.The band also topped charts and graced several notable music magazine covers internationally (​Kerrang, Blunt, Big Cheese, Canadian Musician, Exclaim!​). AOF’s sold-out 10​th​ Year Anniversary Farewell tour in December 2012 touched down on four continents in 24 days, illustrating how meaningful the band still is to their legion of fans around the world.