He may not be a mainstream mainstay, but mention the name “Walter Schreifels” to anyone even tangentially involved in the punk or hardcore scene and chances are you’ll be met with borderline reverence. From his tenure in legendary hardcore bands like Gorilla […]

He may not be a mainstream mainstay, but mention the name “Walter Schreifels” to anyone even tangentially involved in the punk or hardcore scene and chances are you’ll be met with borderline reverence. From his tenure in legendary hardcore bands like Gorilla Biscuits and Youth Of Today to his work in the pioneering post-hardcore act Quicksand and cult favorites like Rival Schools and the Britpop-leaning Walking Concert, Schreifels has proved himself to be one of the most talented and diverse songwriters of his generation. Now, over two decades after GB released their landmark album Start Today, Schreifels is ready to once again transcend his hardcore roots and show another side of his constantly shifting skin with his solo debut An Open Letter To The Scene.

“I think it’s about time for me to step out there on my own for a while now because lord knows I haven’t been much good at keeping bands together,” Schreifels responds with a laugh when asked why for the first time in his musical career he decided to release these songs as Walter Schreifels. “It took me a while to feel confident performing solo and under my own name,” he continues. “It’s also been an adjustment not being in a band and having that kind of feedback and camaraderie to fall back on. To stay creative I needed to change the format and put the weight of it on my shoulders, which meant finding new ways of achieving the sound in my head.” The result is An Open Letter To The Scene, an album that’s simultaneously new and familiar and that grows from hardcore roots without relying on the genre’s sometimes formulaic clichés.

From stripped-down acoustic meditations like the album’s title track to Schreifels’ psychedelic-tinged cover of Agnostic Front’s “Society’s Sucker” and an intricately arranged version of his CIV Classic “Don’t Gotta Prove It,” An Open Letter To The Scene is arguably the first project Schreifels has ever recorded that manages to incorporate all of his diverse influences and recontextualize them into a cohesive whole. “Some of the songs are very personal,” he explains,” For example, the lyrics to ‘Open Letter’ are about a real time and place that I experienced and a person that I knew—but what I think makes the song special is that personal take on the universal theme of loss, so you don’t have to know who Raybeez from Warzone is or what hardcore means to me [to relate to the song],” he explains. “Overall I’m happy with the balance between light and heavy, loud and soft.

In fact in many ways An Open Letter To The Scene is as much of sonic roadmap as it a lighthouse and although piano-tinged, harmony-rich ballads may seem incongruous coming from a NYHC legend, that’s always been a big part of Schreifels’ appeal. “I came up in the hardcore scene and have followed on from there, but after a while I spun so far from that point I could barely see it anymore until I realized it was just over my shoulder again,” he explains when asked about his career’s trajectory. “With Walking Concert I made a break with the style I had developed through Quicksand and Rival Schools and that felt right, but on this album I wanted to break with the idea of being in a band to gain something new,” he continues. “For those unfamiliar with my past work, I don’t think it matters if you know who Agnostic Front are [to enjoy these songs]—but I suspect if you were a fan, we may have some nice catching up to do.”

Ultimately this all works because Schreifels isn’t trying to transcend his hardcore pedigree—and if there’s one constant in his musical career it’s his inability to conform to musical fads. “For better or worse, I don’t think I’ve ever fit into an established genre very well; even with Gorilla Biscuits, which is so closely connected to hardcore, the music exists separately from the genre,” he explains when asked about An Open Letter To The Scene’s inherent diversity. “I’ve definitely done my fair amount of name checking on this album, from [Love’s] Arthur Lee to Biohazard’s Evan Seinfeld,” he explains. “The people I am close with have all taught me something, made me laugh, made me mad, broke my heart, made my day—and I draw from those experiences; I’m a fan and I’ve tried to emulate some of my heroes with stealth and heart.”

If that’s Schreifels’ dream, there’s no question that An Open Letter To The Scene is going to bring him one step closer to fully realizing it—and after two decades of touring professionally Schreifels still has a fire burning inside that hasn’t waned. “I still enjoy being a musician, he reflects, “it’s the best job in the world if you want to see the world. I’ve always had songs in my head and as long as new ones keep coming, I’ll want to get them out somehow,” Schreifels summarizes. “I’m pretty liberated from the trends these days, which makes it easier and more fun to pursue my own thing.” 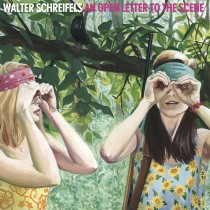 An Open Letter To The Scene