The Pains Of Being Pure At Heart

Do The Pains of Being Pure At Heart belong? After garnering widespread acclaim from the likes of The New York Times, Pitchfork and NME to countless indiepop forums, blogs and even Live Journals for their out-of-nowhere s/t 2009 Slumberland debut, have The […]

Do The Pains of Being Pure At Heart belong? After garnering widespread acclaim from the likes of The New York Times, Pitchfork and NME to countless indiepop forums, blogs and even Live Journals for their out-of-nowhere s/t 2009 Slumberland debut, have The Pains made the kind of record that will matter to the kind of people to whom records still matter?

From the opening explosions of electric guitar on “Belong” (“We don’t”) and the sumptuously synthetic dance pop perfection of “The Body” to the prom-in-heaven chorus of “Even in Dreams” and the closing moments of the uncommonly sincere and affecting “Strange” (“…and dreams can still come true”) the answer is an unqualified, resounding (and damn good sounding) “Yes.”

Having moved beyond mimicking, albeit exquisitely, their impressive record collections, this album is a celebration of the possibilities of pop from New York City’s pre-eminent indiepop believers. It is as much an affirmative answer to “can they” (rise above their influences? Capture the magic of their debut without repeating it? Use color on their album sleeves?) as it opens the door to the more difficult question of “how do they?”

Or more precisely, how do they make such affecting, yet unaffected pop music? How do they sound at once confidently vulnerable and carelessly thoughtful? How does a band on Slumberland make a record with two of the most recognized producers in the world and come out the other end sounding even more like themselves than before? The dichotomies are daunting, but their resolution on Belong is nothing short of stunning.

Recorded with the production and mixing team of Flood (Depeche Mode, U2) and Alan Moulder (Smashing Pumpkins, Jesus and Mary Chain, Ride) and Belong unleashes added power, while retaining all the sweet sweet melodies that still hit that pop spot.

“I definitely see this album as keeping with what we started doing at the beginning, only more,” says singer/guitarist Kip Berman. “More immediate, more noisy, more beautiful. We never stopped believing in noise and pop, but now we’ve pushed both further. Compared to the last record, It’s far more visceral, more vital, more of the body. It’s about feeling, not feelings.”

A continuation of what they started is a good thing, considering the loyal admirers and grass-roots support for what “could be the most promising indie pop group around” (Pitchfork). Never ones to get bogged down in self-seriousness, though, what we’ve got here is a band who tends to spend most interviews talking about how barely-remembered underground pop bands of the 80s and 90s are far superior to their own music, eats copious amounts of Haribo Gummi Candy and plays Boggle and Basketball on the road.

“The whole experience has just been a lot of fun for us – and a huge learning process,” says singer/keyboardist Peggy Wang, “We’ve really always gone more on intuition than technique. We’ve always followed our heart. My favorite bands are the ones where you can tell the people are true friends and would be hanging out together even without playing music – or at least that’s what we are and I wouldn’t want it any other way.”

One can certainly feel the intuitiveness and immediacy in each of the album’s ten tracks. But where past offerings might’ve cocooned front man Kip Berman’s woozy tales and beckoning high tenor in layers of gauze, Belong bathes them in a cathedral-like stained-glass light, revealing the beauty and pop perfection that once hid beneath fuzz and reverb. Radiant and heavenly, the band exults in the freedom and possibilities of pushing their sound beyond simple fuzz pop motifs and, liberated from the burden of those fuzzy memories, elevates their songwriting to new heights.

“Alan Moulder and Flood had a lot to do with helping us believe in ourselves, but they didn’t try to change the way we did things,” says Berman. “They just helped us focus on the things that made us ‘us,’ and allowed us to go all-in on the things we loved and strip away the things we didn’t. It was an amazingly validating experience to even get a chance to work with them, since they came into this because they saw something in our music, not because we were some kind of fat paycheck or will win them a Grammy.

Perhaps not, but The Pains of Being Pure at Heart have come a long way since their beginnings as drum-machine equipped neophytes playing a legendary 5 song, ten-minute set at Peggy’s birthday party in March of 2007.

Through a self-released EP in 2007 and a series of eagerly-received singles like 2008’s “Everything With You” and “Kurt Cobain’s Cardigan” the band developed an intensely loyal underground following. Upon release of their self-titled debut album in 2009, that acclaim extended to well-respected cultural tastemakers like The New York Times (“sensitive and sublime, Best of 2009) Pitchfork (Best New Music, Best of 2009) Stereogum (“Addictive pop gold” Best of 2009) and The NME (“pure indiepop to hold close to your heart,” Best of 2009).

Looking forward, Spin chose Belong as one of the upcoming “winter albums that matter most”, and Pitchfork gave the single “Heart in Your Heartbreak “Best New Music, stating “It’s immediately appealing in the same way their debut was.”

“At first, it kind of surprised me that anyone would really take notice at all,” recalls Berman. “We’re an indiepop band and so many of our heroes were pretty much ignored beyond really obsessive music nerds – people like us. So I never expected much more than about maybe 50 people (parents not included) to like us – but hopefully those people would like us a lot. At some point, it occurred to me that ‘hey, we’re not hitting a wall here, we’re actually doing things right and people that might not care about out of print Rocketship singles or Sonic Youth b-sides actually like this as pop music – which to me is even more cool. We’re always eager to tell people about bands that are way better than us and educate younger people about all the cool, underappreciated music out there.”

Belong’s strength is the quality of the songwriting and each songs ability to sound distinct from one another while still holding together as a unified record from start to finish. Some, like the fuzz-mad “Heaven’s Gonna Happen Now,” “Girl of 1,000 Dremas” and statuesque “Too Tough” wouldn’t sound out of place on their first LP, taking their cues from Berman’s plaintive voice and liberal use of fuzz guitar. Others, like “The Body” and “My Terrible Friend” derive their power from drummer Kurt Feldman’s pulsing rhythms and Peggy Wang’s more pronounced keyboard lines – a winning development that helps push the band beyond their comfort zones to great effect.

One place they never deviate is in their connection with their fans. Like them, The Pains have an idealism that stems from a nearly unhealthy devotion to pop music. Talking to the members one needs to pull out their band-to-conversation calculator, as they are likely to go off about bands they love – from The Pastels, The Promise Ring and Black Tambourine to Sonic Youth, Smashing Pumpkins and O.M.D.

“The whole idea of the album, for me, is about what it’s like to not belong,” says Berman. In part it’s like our band – we have all these amazing opportunities, but I feel constantly out of place. Not ungrateful – but like, undeserving. On the other side it’s the idea of not feeling a sense of belonging individually and how it’s so great to be able to find someone else who doesn’t belong so you can not belong together. That’s what this band has always been about – being on the outside looking in. We somehow snuck our way into the conversation of ‘real bands’ even though I still think don’t really belong.”

Berman might want to rethink that statement – With Belong, The Pains of Being Pure at Heart have created a piece of sonic bliss that fits – for the moment, and for the long-run. 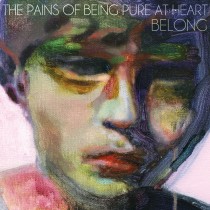