The debut album from Spanish Gold—a newly formed band featuring former Hacienda guitarist/vocalist Dante Schwebel, Brownout guitarist Adrian Quesada, and My Morning Jacket drummer Patrick Hallahan—South of Nowhere is a densely layered love letter to Laredo, the spirited but often troubled Texas border town where Schwebel and Quesada grew up. “It can be a dangerous and violent place, and the border situation is very scary, but at the same time a lot of the people there are really hopeful and happy,” says Schwebel. Exploring the conflict in what Schwebel calls “feeling disillusioned or desperate about what’s happening around you but still trying to find some hope,” South of Nowhere embodies both a high-charged tension and defiantly joyful mood. And in their seamless swirling-together of rock & roll, soul, psychedelia, and pop—a summery, groove-heavy sound at turns inspired by Donny Hathaway, ‘70s rock, and early-‘90s hip-hop—Spanish Gold reveal the supreme musicianship and easy chemistry at the heart of their collaboration.

Recorded in three sessions split up among each band member’s current home city—Schwebel’s Nashville, Quesada’s Austin, and Hallahan’s Louisville—South of Nowhere finds Spanish Gold teaming up with producer/engineer Collin Dupuis (whose previous work includes engineering albums by Grace Potter and the Nocturnals, JEFF the Brotherhood, and The Black Keys, as well as Dr. John’s Grammy Award-winning Locked Down) and a cast of guest musicians featuring My Morning Jacket guitarist Carl Broemel, Heartless Bastards vocalist Erika Wennerstrom and bassist Jesse Ebaugh, Raconteurs drummer Patrick Keeler, Whigs bassist Timothy Deaux, Grupo Fantasma drummer/percussionist John Speice, and the entire horn section from Black Joe Lewis & the Honeybears. “The album’s absolutely a group effort from all the friends we called in to join in the festivities, who saw all the fun we were having and wanted to give their time and energy to make it even better,” notes Hallahan.

For Spanish Gold, that fun began when Schwebel contacted Quesada (who’d recently paired up with GZA to rework the Wu-Tang Clan member’s 1995 solo album Liquid Swords) and asked to get together and record a batch of songs Schwebel had written about their shared hometown. After laying down a few demos, Schwebel enlisted Hallahan (a longtime friend), and the three took to Nashville in November 2012 for what would become South of Nowhere’s first recording session. “At that point Adrian and Patrick had never even met before, but as soon as we got together it was clear that we’d completed the puzzle, and we ended up recording about half the record in three days,” says Schwebel. And while both Quesada and Hallahan first perceived the project as a solo outing for Schwebel (who’d newly departed from Hacienda), it was quickly evident that Spanish Gold would have a life all its own. “I came into it thinking it would be fun little side project, but it turned into a very real creative entity that we all feel very serious about,” says Hallahan.

Kicking off with “One Track Mind” (a bouncy and breezy number that blends handclap-backed harmonies, guitar picking that deftly replicates the heady beats of RZA and Dr. Dre, and Schwebel’s soulful crooning), South of Nowhere continually pushes into strange and wild directions that affirm Spanish Gold’s adventurousness as musicians. On “Out on the Street,” for instance, the band wraps up Schwebel’s steely storytelling in danceable grooves and infectious melody, while “Movin On” takes on a shimmer and strut reminiscent of the weirder edges of ‘60s rock & roll. Later on the album, Spanish Gold gracefully shifts from the woozy, sun-soaked haze of “Day Drinkin” to the heart-on-sleeve soul of “Reach for Me” to the epic pop triumph of “Lonely Ride.” And as South of Nowhere’s centerpiece, the album’s title track creates can’t-turn-away drama from smoldering guitar, harmonies that soar and descend, and lyrics both haunting and thrilling in their portrayal of reckless desperation (“I ain’t ever losing you/I won’t say what I’m gonna do,” sings Schwebel in the gut-punching chorus).

In dreaming up the kaleidoscopic sound of South of Nowhere, Spanish Gold again mined much inspiration from life in Laredo. “Because we were so isolated growing up, we weren’t going to punk shows and trading zines or getting into some cool underground scene,” says Quesada. “We mostly discovered music from watching MTV, so a lot of that ‘80s pop and hip-hop is very much ingrained in us.” To unearth those early influences and twist them into something entirely fresh, the band first worked off of Schwebel’s playful merging of disparate genres and vibes. “I’d give the other guys some vague idea of a sound, and they’d just read my mind and come up with something right away,” says Schwebel. “Like I could tell them, ‘Okay, Notorious B.I.G.’s making an appearance on Knight Rider—what’s the music for that? Or, ‘Michael Jackson’s hanging out in Miami for the weekend, what’s that sound like?’ And then for one song it was, ‘What if Tom Petty sang “Borderline”?’ It’s a lot of strange reference points, but we understand them because we’re each from that MTV generation.”

While all those pop-perfect melodies and super-smooth rhythms keep South of Nowhere blissfully catchy, each song is ultimately built on a raw, edgy emotionalism stemming from the city that inspired it. “Laredo’s a really unique place, although I didn’t completely realize that until I left,” says Schwebel. “You could cross freely into Mexico, so I sort of had this experience of growing up in two worlds. Unfortunately, because of the drug-cartel culture, it’s also a dangerous city. You definitely have to have a thick skin to get by.” And though a toughness of spirit is evident throughout the album, Spanish Gold was careful to infuse all of South of Nowhere with certain joie de vivre. “I’m not interested in making music that’s too moody or introspective or heavy-handed, I want songs that are danceable and energetic and just really good tunes,” says Schwebel. “But lyrically there’s something else happening underneath all that,” he adds. “It’s just sort of hidden there for people to dig deeper if they want to, and figure out what’s really going on in the song.” 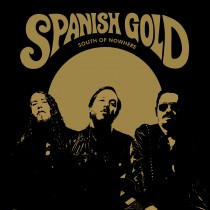 “Out On The Street”