Simone Felice is a celebrated songwriter, author, and poet. He was born on 4 October 1976 in Palenville, New York, a small working-class hamlet in the Catskill Mountains.

Simone Felice is a celebrated songwriter, author, and poet. He was born on 4 October 1976 in Palenville, New York, a small working-class hamlet in the Catskill Mountains.

At the age of 12 Simone suffered a brain aneurysm and was pronounced clinically dead for several minutes. Recovering from emergency brain surgery in a local hospital, he spent two months in intensive care, relearning basic motor skills, including reading and writing.

When he was 15 he formed a punk band with friends, making weird noise-rock in his grandpa’s barn. Their emphasis was on head-banging and freaky storytelling. By 18, he had quit school and was fronting the band (by this time calling themselves Eight Body Trunk, in homage to the 1950’s Lincoln Continental an aging mafioso drove up and down the streets of their shabby town) as they played barns, bars, and low down clubs, including New York City’s fabled CBGB’s.

Eventually the young rockers went their separate ways and Felice began writing poetry and vignettes, leading to the publication of his first collection, The Picture Show, when he was 22 years old. He began performing these bizarre monologues regularly at the historic Nuyorican Poets Café in New York’s lower east side, garnering the young poet invitations to read in London, Harvard University, San Francisco and Berlin.

In 2004 and then 2005, Simone published his first short works of fiction, Goodbye Amelia, a coming of age story about a small-town girl with secrets to keep and a hunger to see the world, and Hail Mary Full of Holes, a fable noir about a prostitute struggling to survive at the dawn of the Reagan era.

In the Fall of 2001, just after the attacks on New York City, Simone began writing songs with his brother Ian. Together they retreated to the woods they grew up in, where jobless with a cheap guitar they wrote and made recordings (two archived collections know as The Big Empty and Mexico) with their friend Doc Brown. In this manner the two brothers clocked four years in complete obscurity, sewing the seeds of what would become (with the edition of younger brother James in the Winter of 2006) The Felice Brothers, whose subsequent albums Tonight at the Arizona, The Felice Brothers, and Yonder is the Clock have garnered international praise, earning these Upstate New York natives an inarguable place in the Great American Songbook. Over the group’s history, from starting out playing New York’s subways and streets, to Radio City Music Hall and beyond, brother Simone has been one of it’s key lyricists and arrangers, co-writing some of the boys’ most beloved songs, including Don’t Wake The Scarecrow, Frankie’s Gun, Run Chicken Run, Ruby Mae, Whiskey in My Whiskey, Love Me Tenderly, Hey Hey Revolver, Mercy, Wonderful Life, Ponzi, Your Belly In My Arms, The Devil Is Real, and Radio Song to name a few.

At the request of iconic record producer Rick Rubin (Johnny Cash, Tom Petty, Beastie Boys, Adele, et al), Simone flew to California in the late summer of 2008 to play drums on the Columbia Records release I and Love and You by The Avett Brothers. Lending his signature Catskill Mountain funk to the Avett’s riveting songwriting and Rubin’s thoughtful production, Felice appears on some of the albums stand-out songs, including the title-track and lead single I and Love and You, which helped send the album to #1 in the Billboard folk charts

In the winter of 2009 personal tragedy reared its head when Simone and his long-time love lost their first child in a late-term miscarriage. It was then that he retreated to a cabin in the Catskill’s with old friend Bird and began writing and recording the songs that would (unknown to them at the time) become The Duke & The King’s album debut. Taking their name from the itinerant Shakespeare theatre grifters in Mark Twain’s The Adventures of Huckleberry Finn the project released its gripping Nothing Gold Can Stay in the Summer of 2009 to critical acclaim, being hailed as one of the most haunting and honest albums of the year. 2010’s followup Long Live The Duke & The King has been similarly praised.

Felice’s first novel, Black Jesus, was recently bought by award-wining publisher Allen & Unwin (Atlantic Books/Faber&Faber) and Random House, which will release a German translation in spring 2012. It tells the story of a young Marine shipped home to his nowhere town after being blinded in action by a homemade bomb, and the unexpected friendship he finds with a mysterious dancer who arrives there fleeing darkness and violence of a different kind. Part love story, part protest of the broken promises lying at the heart of the American dream, Black Jesus is a passionate, twisted hymn to the marginalized and forgotten.

On 2 June 2010, after a series of fainting spells, Simone underwent emergency open-heart surgery at Albany Medical Center when doctors discovered that a childhood congenital disorder had left the 33 year old with an irreversible calcification of the aortic valve, leaving only 8% blood-flow to the body and brain. Just two weeks after the surgery he joined his brothers on stage at Pete Seeger’s annual Clearwater Festival to help rid their beloved Hudson River of industrial waste. The following month Pearl Felice was born, a healthy blue-eyed girl who came in a summer thunderstorm.

In the year following his heart operation and Pearl’s birth, Felice did what he’s always done: He wrote songs. With a renewed clarity and sense of purpose, Simone bent to his new work, leaving behind any past monikers, or preconceptions they might hold, in search of something pure, something truly his own.

Players on these new recordings include friends from Mumford & Sons and The Felice Brothers. The album was written and produced over a year’s time, at five unique locations: Felice’s barn-attic at home in the Catskills-New York, an abandoned High School in Beacon-New York, The Old Church in North London, a Manhattan apartment, Dreamland Studios in Woodstock, and was ultimately woven together with mastering guru Greg Calbi (Patti Smith, John Lennon, Dylan, Springsteen, et al) in New York City.

As one listens, this seems the album Felice has been laboring towards since he first began writing and making music, as it truly showcases Simone’s extraordinary storytelling and lyrical style; a unusually rich balance of the sacred and the obscene, heartache and hope in the same breath. A self-revelatory work uncommon in it’s purity and depth, ‘Simone Felice’ is set for worldwide release in early April 2012, and is certain to cement Felice’s place as one of the great songwriter-poets of his generation.

In autumn 2011 England’s esteemed Guardian newspaper commissioned Felice to write a personal memoir on the subject of his near-death experiences, first as a young boy, then as a grown artist, and how these two odd brushes with ‘the other side’ have influenced his work. The piece ran in September and begins with a lyric from The Wizard Of Oz:

I would not be just a nuffin’, My head all full of stuffin’,
My heart all full of pain.
I would dance and be merry,
Life would be a ding-a-derry,
If I only had a brain…

Simone lives less than a mile from the creek-house he was born in, and travels his own country and abroad sharing his songs and stories. 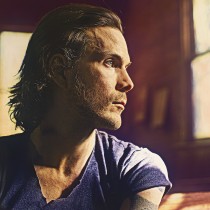