It’s almost human, the way the ocean can instantaneously switch from sweet serenity to unharnessed rage, harmony to fury, calm to ill. It’s in balancing such opposing poles that post-punk five-piece seas prove their moniker to be so apt, and their […]

It’s almost human, the way the ocean can instantaneously switch from sweet serenity to unharnessed rage, harmony to fury, calm to ill. It’s in balancing such opposing poles that post-punk five-piece seas prove their moniker to be so apt, and their art so compelling.

The Toronto outfit’s latest LP, Cursed, is a tour-de-force of dynamic but unbridled emotion, effortlessly swaying from dreamy and delicate to outright devastating, often without pause. It builds atop the foundation established on previous releases, pushing both ends of the band’s sonic spectrum to new extremes with a tidal bore of raw energy.

Seas began as Hughes’ solo project – an outlet for ideas outside of his work with long-running post-hardcore quartet Moneen. He wrote and performed his 2011 EPs, Fragments and Dreaming, all himself, but tapped Moneen bandmates Peter Krpan and Erik Hughes to anchor the drums and bass, respectively, for subsequent live shows. Surrounding the release of seas’ debut LP, 2013’s Fade Out into the Night, guitarists/multi-instrumentalists Michael Bolt and Adrian Mottram had joined the ranks, and come the recording sessions for Cursed, the five-piece was formally cemented, completing the continuum from singular to plural, individual to communal.

“With the first full-length, I intentionally did everything other than the drums and bass on my own – in a way just to prove something to myself; I just needed to,” Hughes muses. “This time, I felt more comfortable writing the songs and then leaving them kind of bare to let the other guys make their marks.”

The result is a notably wider array of influence underpinning these songs, with tinges of the likes of Quicksand, Dinosaur Jr., Mew, and Sigur Ros emerging at various points throughout. The gentler moments are wrapped in an ethereal sonic blanket while the grittier ones benefit from an intensity and urgency that’s undeniably palpable.

Mottram took on production and engineering duties for Cursed at Toronto’s Revolution Recording, and Hughes credits him with its enveloping sonic atmosphere. “There’s something really special about playing with someone and being on such a similar level that things just effortlessly click,” Hughes offers.

That applies equally to his other three bandmates, and is more than clear when seas takes the stage. As on record, the group takes various shapes in the live environment, from stripped-down acoustic iterations to the full-on storm of a full-band show. For the latter, Hughes says his approach is the same as it was when he was 20 – maximum energy for maximum impact. 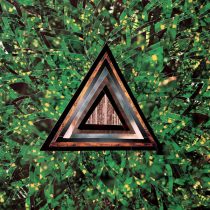 All That I’ve Forgotten