Dine Alone/Dualtone are proud to announce the addition of Newcastle, UK’s LITTLE COMETS to their expanding rosters. The album titled Life is Elsewhere will be released in Canada and the US on August 20, 2013.

Dine Alone/Dualtone are proud to announce the addition of Newcastle, UK’s LITTLE COMETS to their expanding rosters. The album titled Life is Elsewhere will be released in Canada and the US on August 20, 2013.

Featuring Robert Coles (lead vox/guitar), Michael Coles (lead guitar/vox) and Mathew Hall (bass guitar/vox), Little Comets create music that is lyrically intimate and poignant, yet musically high-spirited and addictive. An unlikely combination of a Cambridge graduate, particle physicist, and sailor, the band formed when brothers Robert and Michael chanced upon Matthew in a crowded room. Quickly eschewing the established methods of relentless gigging and label baiting, Little Comets chose instead to perform in the furtive surroundings of front rooms, trains, trams and university lecture halls – creating a community of rapt listeners who would return to see the band in more established concert venues. “People were forced to engage with our music in such a close environment, and it taught us a great deal about the measure of a song – how it could attach itself to a person that stands only an inch away,” says Robert.

The band briefly signed to a major in 2009 and released debut album In Search of Elusive Little Comets in January 2011. Their big breakthrough came with the release of debut single “One Night In October” which reached #3 on the UK Independent Chart, and received oodles of praise from several popular BBC Radio 1 DJs. More in the line with the band’s indie-minded philosophy, Dine Alone and Dualtone bring sophomore album Life is Elsewhere to Canada and the US.

Life is Elsewhere features 14 songs that demonstrate the ability of Little Comets to blend vernacular and content – pairing propulsive beats with layered melodies in the vein of a more sedate Talking Heads or less conspicuous Vampire Weekend. The disc’s buoyant opener, “A Little Opus”, laments the shackles of old institutions in British society, while “Violence Out Tonight” is an unsparing portrait of sexual assault. Meanwhile the sparkling first single, “Jennifer” is a whimsical description of an uncommunicative relationship, which steadfastly refuses to swerve from a chorus that encapsulates summer in musical form. Then there is perhaps the album’s defining track, “In Blue Music We Trust”, a personal addendum that thematically explores impending fatherhood.

With Michael once again expansively attached to production, and Rich Costey (Franz Ferdinand, Foster The People, fun, Muse, The Shins…) on mixing duties,Life is Elsewhere draws on a deeper musical alphabet than previous work, melding the quiet influence of “incidents, accidents, hints and allegations” with the more sleeve-worthy motions of Fleetwood Mac, Milan Kundera, Jonathan Safran Foer and Tracy Chapman. 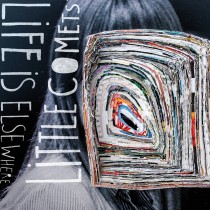