If Future Breeds, the latest studio release from Hot Hot Heat, is proof of anything, it’s that sometimes it takes a while to see things clearly. It’s taken a decade of tours, albums, line-up changes and label switches—all rewarded with building commercial […]

If Future Breeds, the latest studio release from Hot Hot Heat, is proof of anything, it’s that sometimes it takes a while to see things clearly. It’s taken a decade of tours, albums, line-up changes and label switches—all rewarded with building commercial and critical success—for Hot Hot Heat to fine-tune its vision. But with Future Breeds, all that toil has coalesced into the band’s most thrilling effort to date, one that coincidentally brings it full circle.

On Future Breeds, Hot Hot Heat returns to its roots both metaphorically and literally with a hot-wired and proud party album throbbing with spontaneity and creativity. When the band began writing Future Breeds, front man Steve Bays, along with band mates Paul Hawley and Luke Paquin, sought to recapture the energy and sheer love for the art form that drove the late-nineties Vancouver punk scene from which the band emerged.

The follow-up to 2007’s Happiness Ltd., Future Breeds was the first HHH album cut in the band’s own studio, Tugboat Place, which occupies a suite in one of Vancouver, British Columbia’s oldest buildings, a marble-laden tower replete with a haunted floor. It was there over the past two years where Bays slipped into the role of producer/engineer/mad scientist, experimenting with amps and microphone placements, alternative sounds and vintage gear; he even roped in passersby and local buskers to add a little cello here, a beer- and pot-fueled sax solo there.

While some songs were treated like an experimental art project and pieced together over many months, some songs were cut in minutes, intentionally committing to the first or second take. If some artists can lose the plot in their own studios—with too much time in the control room—on Future Breeds, Bays, along with co-writers Paul Hawley (drums) and Luke Paquin (guitar) sought to get out of their own way, and make sure that they didn’t kill the vibe with overdubs and over-thinking. It’s what helps make the album so rambunctious, loud and, well, fun.

“The goal was to make bizarre music with a ton of new ideas that sounded like it was from the future and unhindered by outside opinions,” says Bays. “Basically, if it sounded like something we’d done before, then it was like we were cheating. It was that sort of mentality that has been the fuel for the band. We were just like, ‘Let’s be a freak show punk rock band.’ So much of what makes a band cool are the flaws—the things that accidentally fall into place, like the tambourine that comes in three bars too early or the scream at the beginning of the song.”

And that’s where the energy of Future Breeds originates—it’s a document of a band with a new freedom, carefully shutting itself off from outside influences and emphasizing vibe over perfection. Case in point: the spirited “Goddess on the Prairie,” on which the band recorded live off the floor and Bays’ voice nearly cracks, in immediate, in-the-moment passion. Coincidentally, it marks a first for Hot Hot Heat: “It’s the first positive love song I’ve ever written,” says the newly engaged Bays. “The last album was super bitter, and this one comes from being in a good head space, and surrounding myself only with fun, creative people who get me.”

“A lot of my lyrics are just stolen snapshots from life yanked out of context and spun with a few words that fit the rhythm and flow of the vibe I’m going for that day,” says Bays. Case in point: “21@12”: “We were stranded in a small U.S. town, mid-winter, and we were traveling with our friend who was literally three hours away from his 21st birthday,” remembers Bays. “Not a single person would let him in anywhere and he refused to be stuck freezing in the van so I yanked the chorus lyric idea from a photo I took of him screaming ‘Look, I turn 21 at midnight!’ and pointing at the clock and his I.D., but then expanded it to be more about the cocky, false sense of confidence we experience in our early twenties when we have all the benefits of youth and none of the restrictions of socially-conscious adulthood.

“Almost everything in the world seems funny to me; it just comes down to how you choose to perceive it and present it. Once you stop taking life so seriously, it makes everything interesting.” “Jedidiah” recalls one especially distressing local news story in which the detached, decomposing feet of corpses began washing up on the shores of an island near Vancouver, still encased in their shoes.

Bays turns Future Breeds into a poetic observation of the Vancouver neighborhood in which the album was recorded. The title track, for example, tells the modest but twisted tale of a disintegrating co-dependent relationship between a young girl and a seasoned veteran of the drug and prostitution culture of the notorious East Vancouver neighborhood. “Implosionatic” documents the day on which one man spent hours threatening to jump from a roof of a building just outside their studio window. However, Bays insists, “musically this is still just meant to be a heavy party record…”

“Whether or not this album is on a ‘new level’ is not up for us to decide. That’s up to fans and critics and totally after the fact. Having said that though there’s definitely an unspoken manhunt going on at all times… chasing the feeling you get when you stumble on to a new idea that you haven’t heard before.”

“Future Breeds,” he continues, “is a result of us craving more twists and turns, but also having more tools and less restrictions. It had to be a freak show and a barrage of ideas that weren’t over-thought to the point of being stripped away or streamlined. Sometimes the best moments are the ones that are redundant, pointless or meaningless because they can also symbolize freedom, youth and rebellion.” 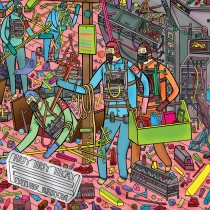