Scene #1: lunchtime, a pub, the English countryside. It is half-past 2010. A man ponders the end of the musical adventure he has been on for almost 20 years, since adolescence. He nurses a cheeky half, but he nurses no grievances. They […]

Scene #1: lunchtime, a pub, the English countryside. It is half-past 2010. A man ponders the end of the musical adventure he has been on for almost 20 years, since adolescence. He nurses a cheeky half, but he nurses no grievances. They were young, they were free… It was fun while it lasted. But it is time to move on. He has some ideas. New ideas, new directions. Now, where did he put that iPad…. and that old tape echo unit that was a snip on eBay?

Interviewer (dated ‘Yoof TV’ mockney accent): So, mate, is this your Big Solo Album statement? Y’know, the thing you’ve been secretly burning to do all this time but you were held back by that band you were in?
The Sometime Frontman (puzzled but firm): No. Absolutely not. Equally, it wasn’t the cathartic thing I needed to do. It was just a continuation of how I live and my day-to-day life in music. There wasn’t this overwhelming feeling of, “I have to get this out of my system”. It was carry on working, carry on writing, and what will be will be. I just knew that I started to get a focused sound. And it was my sound. This is Gaz Coombes’ sound.
Interviewer (narked): Oh c’mon. There must be more to it than that. Frontman with successful band goes solo, creative rebirth and joy unconfined ensues. It’s a well-known narrative. You know the drill. Give us something mouthy!
The Sometime Frontman (unsure): Hmm. Well, the vibe is me going down the rabbit hole.
Interviewer (jiggling excitedly in seat, like a child needing a wee): That’s more like it! Where was that, an awesome Seventies recording complex in the desert near Death Valley, surrounded by cacti and tequila and a mixing desk that Jim Morrison shagged on?
The Sometime Pop Star (patiently): No, that rabbit hole being my studio in my house. Over the years I’ve gathered together some great bits of old gear, little boxes and tape machines and drum machines. I had a lot of fun just expressing myself. I came out of Supergrass definitely feeling frustrated with how we were writing as a band and recording.
Interviewer (patting pockets): Yeah! Slag off those bastards you used to be in a band with!
The Sometime Frontman (sighing): No, we’re still good friends. We’d done a lot – six albums, a compilation, umpteen tours – and it was just time to end it before someone got whacked! But I’ll admit, I do remember feeling a real release and excitement about getting down to the studio and seeing what noises I could make.
Interviewer (leaning forward): Yeah, yeah… Got any drugs?

Scene #2: Interior, a basement. A studio set-up: live room, mixing room, space. Upstairs, two little girls sleep the sleep of the innocent. Underground, a musician-boffin-enthusiast crouches over an old-fashioned looking keyboard. It is a 1978-vintage Prophet 5. His eyes gleam. He has in mind the opening credits of a film – a pop-space odyssey, a fantastic journey into sound, happening in a galaxy far, far away… but at the same time, *very, very near*. He can hear something, something…

Gaz Coombes (voiceover): I’ve called the album Here Come The Bombs. The title goes nicely with the artwork – a bold graphic of headphones as a bomb – and it has a double-meaning. I see my songs as little sonic bombs in a way. But also this part of my lifetime; the last 10, 15 years, they’re strange times socially and politically – a time of seemingly constant war!
Interviewer (getting all Paxman-esque argy-bargy): So is it about war?
Coombes: No, not really, though some songs are soundbites of frustration, or observation. Not that I live in fear day-to-day about war. It’s just really interesting to me to not only see what’s around but try and feel it, imagine it… Try and put yourself in other positions. It’s good for being creative.

Cut to… Scene #3: Interior, a basement. The Sometime Frontman flicks through racks of vinyl. Dust, cobwebs. He has not explored these corners of his collection for years. Not been allowed to, somehow. Neu!, The Residents, Tom Waits, This Heat (a late Seventies outfit from the English north who dug Can) – prized listening from what seems a lifetime ago. Then, his eyes widen. His soundtrack albums: Lalo Schifrin, John Carpenter, Ennio Morricone. Records – experiences – he has loved. Not just the music but the titles: ‘The Pick Up’, ‘Meeting At Dawn’. And the graphics! Saul Bass at his best. So evocative and immersive and complete and transporting, all of it. A trip, in every sense.

Gaz Coombes (v/o #2): I played pretty much all the instruments, with some help from my friend and Co-Producer Sam Williams, who produced Supergrass’s first album, I Should Coco. He played on a few tracks. and he’s a great musician too, so it was cool to be able to step back occasionally, give myself a bit of distance. He was a guiding figure to me back then, and he has been ever since – someone I’ve always played new songs to. With these new songs I’d record in my basement, pretty much on my own, then take the recordings over to Sam’s studio, Temple Sounds. And we’d expand and improve them. But if I was feeling down or negative or too close/inside a song, he’d pull me along and give me some clarity. That was just really, really valuable.
I wasn’t precious – there’s quite a few bass fuck-ups in ‘Sub-Divider’, at the end, where I got wrong notes. But I wanted to leave it there and move on. To get that initial excitement – I didn’t care if I hadn’t totally nailed it.
I’ve been waiting to do a soundtrack record for so long. A few things have come along but never the right one. And I got tired of waiting. So I thought I’d try my own. A song like ‘Sleeping Giant’ [v/o, like Zane Lowe going bananas on his radio show: “a rippling, spacey lament! Coombes, him of the belting Britpop voice, has never sounded more beautiful!”] – I just imagine being in a pod in space, like something out of Duncan Jones’ Moon, this floating weightless feeling.
On ‘Fanfare’ I wanted to stretch my voice too. I’m not suggesting that I’m by any means rapping! But I love Beck, and equally Tinie Tempah, and how they use their voices I just wanted to just try non-melody based vocals.
Or ‘Universal Cinema’ [v/o, that eager kiwi again: “pop-motorik for the soul!”], that’s about absurdism, existentialism – I had the confidence to write that after doing a lot of reading on philosophy last year. and stuff like Camus’ The Outsider It really spoke to me so I took elements from those things and from my own weird experiences.
What can I say about ‘Break The Silence? Well, you can call it blessed-out disco-throb if you like… It started out more lo-fi, with just kick drum and the sound of a weird old synth from the early Seventies, which came with the Hammond organ – it was meant to sit on top of the Hammond, an accompaniment synth. Then I suppose it evolved into something a bit more dancey. And when we were recording it at Sam’s we put t-shirts and tea-towels over the drums and just make beats. Yeah, I suppose it’s a burst of exuberance.”

Cut to… Scene #3: a record company office, London. It’s EMI, but not as Coombes remembers it from the 19 years Supergrass were signed. There’s a new team, a new set-up. And a new relationship: Coombes now runs his own label, Hot Fruit Recordings, and he owns his album – he’s using EMI for marketing and distribution in the UK (and different partners in America and Japan). He likes the feeling of liberation, and mobility. He’s making the choices, such as the album artwork – those headphones with a burning fuse. It is based on an animation he designed himself. And such as the first single…
Coombes (addressing a meeting of keen young label creatives): Yes, I know ‘Hot Fruit’ has an industrial loop and an off-kilter time-signature… So why is it the lead single, you ask? Well, it has powerful moments and at the end it goes into a screaming fit. It’s a good statement. It contains different elements: the soundtrack vibe, the middle-eight is kind of ethereal… It covers quite a few areas and is also quite concise…
Coombes tails off. He’s fed up of this blather. He wants to get the music out there – it can do the talking.

Cut to… Scene #4: a garden, Oxfordshire. It is quarter-to-spring 2012. A man has grunted some of his musical toys and kit up the stairs from his basement. He’s working out how much he can fit in a van. His two daughters watch him, curious. They know daddy’s been home more than usual these past two years; they’ve loved it, he’s loved it. And they know he’s now itching to get back out on the road and play his music; he loves it, and they love that he loves it. He said something to them about playing some gigs in old cinemas, using the screen to show some animations. They think that would be really cool.
Gaz Coombes (v/o): “My album is coming from one person. In a band, when you get a group of people who are walking the same path, it can be the most beautiful thing. But with this I felt it was really focused on just what I wanted to get across, and on my inspirations – they were all my things that I’m into, whether it’s film, film soundtrack, or past artists that we didn’t really look at much in Supergrass. That was all really exciting. This is a completely blank page in a blank book, ready to be written on.”
Fade to black… THE END.
And then… THE BEGINNING. 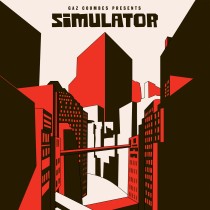 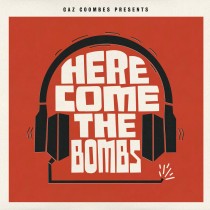