For people who have potentially made 2011’s most bewitching and balmy album, Cloud Control are a delightfully self-deprecating bunch. Born and raised in the spectacular Blue Mountain region within minutes of each others houses, Alister Wright and Ulrich Lenffer had never even […]

For people who have potentially made 2011’s most bewitching and balmy album, Cloud Control are a delightfully self-deprecating bunch. Born and raised in the spectacular Blue Mountain region within minutes of each others houses, Alister Wright and Ulrich Lenffer had never even written a song before Ulrich’s sister Heidi entered them into a battle of the bands competition at Sydney University. Only Jeremy Kelshaw, with the odd stint in ‘High School thrash bands’ under his belt, was studying music. ‘Don’t get me wrong,’ says front-man Alister, ‘we’re all really passionate about music, but none of us had been in bands before. I’m used to it now, but I used to stand rooted to the spot on stage, thinking ‘Oh. My. GOD. What am I DOING?’

You would never know this now, of course. When they all break into irresistible sea-shanty ‘Gold Canary’ – and everyone sings its deceptively simple lyrics – you can hardly imagine that at their first gig Cloud Control, as Jeremy has it, ‘crashed and BURNED’. ‘A keyboard exploded, Jeremy broke a bass string, everything went wrong,’ says Alister, smiling.

From these inauspicious beginnings they’ve created Bliss Release – a debut record that manages to sound at once warmly nostalgic, but never retro. ‘There’s definitely a special dynamic with the four of us,’ says Heidi, ‘It pushes us to write outside our boundaries. It really is that cliché, we really are the sum of our parts.’ We have Ulrich on drums (‘He likes a good fantasy trilogy!’ – Heidi), Jeremy on bass (‘He’s never broken another string!’ – Alister), Heidi on keys, tambourine and vocals (‘Entering us into a band competition, when we had no band, and no songs, is pretty classic Heidi’ – Jeremy) and Alister on vocals and guitar, who wrote ‘Gold Canary’ and a number of its friends while out in the mountains of the Mega Long Valley. ‘It’s just farmland,’ he says. ‘You can’t see any other houses. Okay, there were a few horses. It sounds really funny and stereotypical, but it’s true, it was like that. It was a shack. Not that I would mind living in a shack…’

Whether you can hear the influence of the stunning landscape on Bliss Release is something they can’t quite decide. Not least because it wasn’t all written while out in the bush. ‘I live in King’s Cross, which used to be the Red Light District,’ explains Alister. ‘I wrote ‘Meditation Song’, ‘Just For Now’ and ‘Hollow Drums’ there, and it’s a pretty hectic part of town.’

Recording in Jeremy’s parents’ living room, surrounded by his ‘creepy family photos’ and childhood piano, with ‘a bush filled gulley’ right out the window, Bliss Release took them six or seven months to complete. It was about letting things happen and unfurl. ‘We did things you would never dream of doing in a live setting,’ continues Jeremy. ‘Like patching your gear in all the wrong ways. We were making true and legitimate accidents, and we tried to embrace that was much as we could.’ Having recently won a clutch of awards in their Native Australia and hotly tipped as ‘Ones to Watch’ by the UK press, the band are currently playing a prominent slot at Australia’s Laneways festival before relocating to Europe for a host of shows with their debut album release pencilled in for early Summer. 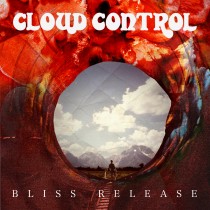