Chastity’s second full-length record, Home Made Satan, is a more barbed direction for Whitby, Canada-native Brandon Williams. It’s an emotional and political concept record, the 2nd instalment of a building trilogy, from the perspective of a young man who’s spent […]

Chastity’s second full-length record, Home Made Satan, is a more barbed direction for Whitby, Canada-native Brandon Williams. It’s an emotional and political concept record, the 2nd instalment of a building trilogy, from the perspective of a young man who’s spent too much time alone, allowing paranoia to drown out the reality of the outside world. It’s an album about fear, an intense meditation on youth, suburban life and extremism in a sinking Western World.

Williams, who produces all his own music, created something with a strong cinematic nature, a record that sounds somewhere between My Chemical Romance and The Smiths (even as he cites Morrissey’s alignment with the UK’s far-right as the complete opposite of his own political view). Recorded in a small studio in London, Ontario, with his full live band in the few weeks between a European tour with Fucked Up and a seven-week North American tour, Williams crafted Home Made Satan like he was producing a film—his bandmates were the cast members, his engineer the cinematographer, and Williams the writer. “It’s visual,” he says. “I’m scoring this picture I have, and trying to get it as close to people’s ears as it is in my mind.”

The new songs are gothier and hookier than ever, recalling ‘80s goth staples like The Cure. Home Made Satan’s got more eyeshadow than 2018’s acclaimed shoegaze-meets-hardcore Death Lust, and it’s got pop sensibility for days. Williams has toned down the reverb, too, on the new record, with an emphasis on vocals and lyrics. Home Made Satan, with its lines about commies and masochism and the evangelical right, is meant to sing along to.

And when you do, you’ll mostly be singing about America’s fall. About hyper alienation and xenophobia, the people’s struggle for happiness, those without access to community who become afraid and more alone. “It feels like America’s constantly coming undone at its seams,” Williams says, “and it’s falling apart on its most vulnerable people first.” He’s jumped more into politics on this record, with an intent to represent those often unrepresented.

Through songs like “Flames”—a gauzy, hook-heavy, tongue-in-cheek tune that draws a line between sexual fetishism and the fetish of the “American dream,” and parallels bleak emotion with bleak economy—and “Last Year’s Lust,” a melancholy track about the dark thoughts we get when we’re alone for too long (“Today, I stay home / I make sure I’m not going to hell”), Williams sings the song of those trying to survive on their own.

Home Made Satan is acutely political, but it’s also romantic. “The Klan still meet in London, you should come,” goes the song “Spirit Meet Up” a fraught-sounding standout about a Bonnie and Clyde-style affair. “I’ll bring my weapons / Unmask ‘em, skin ‘em, cut ‘em / Watch them run, organs bleeding, falling, dying.” The young man is out to fight for what he believes, battling hate and discovering critical thought of his own (“With a full stomach and another plate to eat / You say commie like it’s a bad thing,” he sings.) The violence, Williams explains, is done with the belief that it will “net good” for the world at large. As the record moves on, “Sun Poisoning” is about the melancholy that often comes with the vulnerability of a new relationship, feeling happy and sad at the same time, “Do you want to see / How easily my teeth bleed?” Williams sings, “Do you really want to see / If you can make me happy?”

On “The Girls I Know Don’t Think So,” which Williams refined with the help of his bassist Julia Noel, he sticks up for the concerns outside of his own lived experience. Here, the young man finds his heart. He ridicules men who harass women, men who say “no need for hostility,” when there is a long list of reasons to be hostile. “Dead Relatives” is a mournful song in which the young man bemoans traditional American values and stews at home, hoping for the day of radical reform to come— “There’s a special place in hell for the Christian right,” Williams sings, “Bury your parents tonight.”

With Home Made Satan, Williams chooses a side. And that side is with youth on the fringe, those in the struggle, and the far-left. With this record, Chastity rises as a young voice for revolutionary thought, action and song. 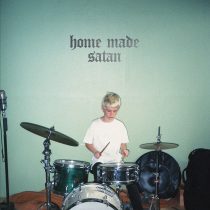 The Girls I Know Don’t Think So