“We were toying with the idea of calling the album Our Strongest Material To Date”  laughs Jeremy Schmidt. The Vancouver outfit’s keyboardist can afford to joke about what they describe as “the dog-eared ace of spades of all rock band platitudes.” It was during […]

“We were toying with the idea of calling the album Our Strongest Material To Date”  laughs Jeremy Schmidt. The Vancouver outfit’s keyboardist can afford to joke about what they describe as “the dog-eared ace of spades of all rock band platitudes.” It was during a solo show under his Sinoia Caves alias that he performed a revelatory electronic prototype for Mothers Of The Sun. This quintessentially Black Mountain tour de force kicks off the renamed but still accurately titled IV. “It’s actually an older song which we couldn’t get quite right before,” explains Schmidt. “It has all the elements that we gravitate towards, built into one miniature epic.”

Chief among these elements is the distinctive voice and breathtaking range of Amber Webber, whether she’s powering through interstellar boogie on Florian Saucer Attack, setting the celestial tone for her beautifully orchestrated ballad Line Them All Up, or constructing the choral midsection for Space To Bakersfield, a psychedelic soul finale inspired by Funkadelic’s deathless Maggot Brain. “We’d meant to have an actual choir, but I ended up singing all the parts. It’s a choir of me! I’d never written an arrangement like that before.”

The group’s sense of rediscovery as a creative whole is tangible throughout. They were joined in the studio by spiritually attuned bassist and veteran purveyor of the riff, Arjan Miranda (formerly of S.T.R.E.E.T.S, Children, and The Family Band) whose roots, heart and soul are connected to the same soil and cement that Black Mountain were borne from. Recording was primarily done in close collaboration with Sunn O))), Wolves In The Throne Room and Marissa Nadler producer Randall Dunn, at his trusted Avast! facility in Seattle. “It’s got some grit,” enthuses guitarist and co-vocalist Stephen McBean.  “And there’s a history there: Northwest punk, grunge and general weirdo outsider stuff, plus it houses the same Trident mixing board used for Alice Cooper’s Billion Dollar Babies.”

A heightened mystique and dramatic yearning can be heard on such perfectly formed earworms as Cemetery Breeding, described by drummer, engineer and occasional pianist Joshua Wells as “a dark pop song with an emotive urgency to it that taps into my teenaged eyeliner-and-trenchcoat wearing sensibilities.” Wells’ eclectic tastes and multitasking flair – his supple percussion also provides the backbone for Dan Bejar’s world-conquering Destroyer ensemble – inform Black Mountain’s wider palette as well as their rhythmic choices. “It’s like painting. All sound colour. And space is really important. People think of us as this heavy rock band – and we are sometimes – but it has to be tempered with space. There has to be these emotional cues. It’s not just about rocking out.”

Check out the way Amber and Stephen’s harmonies telepathically entwine on cosmic standout Defector, or Constellations’ unforced confluence of synthesizer pulse and double denim riff. In addition to being blessed with a melodic facility that eludes most rock groups, Black Mountain effortlessly echo the limitless possibilities of the internet age. Sonic tributaries that never met in the real world – AC/DC and Amon Düül, Heart and Hawkwind, King Crimson and Kraftwerk – flow together on IV as they do online. It fits with McBean’s unifying theory of the modern YouTube stoner, wherein “kids discover their own alternate universes online, from Cologne to Melbourne… Detroit to Laurel Canyon..  the ice age to annihilation. There’s a new scene with a different set of headphones creating a postmodern futuristic Fantasy Island. All those fledgling heads in waiting escaping within their computer screens!”

This impulse to connect is reflected by the band members’ activities and journeys outside the mothership. Josh and Amber have their self-run Balloon Factory studio and pop-noir Lightning Dust project. Stephen relocated to Los Angeles six years ago. Traveling and creating via his Southern Lord released hardcore unit Obliterations and ongoing post-punk rock ’n’ roll combo Pink Mountaintops (whose heady sometimes electronic throb led to the majestic, mantra-like You Can Dream). “There’s something very West Coast about us all.” he says. “That rambling restlessness of keepin’ on guides us and keeps the music alive. Whether it’s the gravitational pull of the Pacific Ocean that draws us back together or simply a good taco… The turning up, turning on and getting down is Black Mountain.  It’s home, and it always feels good to come back to. ” 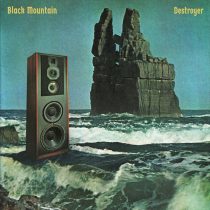 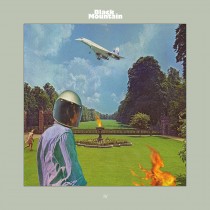 “Mothers of the Sun” 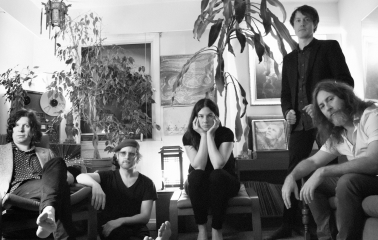 Black Mountain release 8-minute video for “Mother of the Sun”