With its open-armed energy and elegiac grace, “AUGUSTINES” marks a colossal leap forward for Votiv/Oxcart recording group Augustines – no mean feat considering the extraordinary power of their breakthrough 2011 debut, “RISE YE SUNKEN SHIPS.” Songs like “Now You Are Free” and […]

With its open-armed energy and elegiac grace, “AUGUSTINES” marks a colossal leap forward for Votiv/Oxcart recording group Augustines – no mean feat considering the extraordinary power of their breakthrough 2011 debut, “RISE YE SUNKEN SHIPS.” Songs like “Now You Are Free” and the plaintive “Walkabout” are both immediate and engaging, joining joyously unrestrained arrangements with singer/guitarist Billy McCarthy’s signature affective lyricism. “AUGUSTINES” marks a milestone on Augustines’ amazing journey, the work of a gifted band ascending to new heights while simultaneously grappling with their place in the universe.

“You have to do some soul-searching when given the opportunity to manifest your dream,” McCarthy says. “You’re free to walk the walk you always said you could walk.”

“If you struggle for a period of time to get something, there’s obviously a feeling of pride that comes when you achieve it,” says co-founder/bassist Eric Sanderson. “It’s very freeing, but like with any kind of freedom, it comes with a sense of wonder and confusion.”

Augustines was born upon the ashes of the Brooklyn indie rock band, Pela. That combo called an end to its collective trip in 2009, but founders McCarthy and Sanderson reunited to record a series of deeply personal songs chronicling despair, depression, and the untimely death of a close family member. They dubbed their intimate new endeavor, “Augustines,” which trademark issues required be appended to “We Are Augustines.”

“The name ‘Augustines’ resonates for us in many regards,” Sanderson says. “The minute we gave the project a name is really when it birthed itself. To have that name taken away from us, or even modified in a minor way, was always difficult. Now we’ve come full circle.”

“We went touring together for two and a half years,” Allen says, “ Over two hundred shows…You can imagine the kind of bond you get from going on the road like that. You become a family.”

By the end, Augustines felt akin to Archibald MacNeal Willard’s “The Spirit of ’76,” bloodied but unbowed as they marched home from their long campaign. They paused to heal their dents and dings, with McCarthy embarking on an extended expedition that saw him visit such far-flung locales as Kenya, Turkey, Mexico, and Alaska. He eventually drifted back to the Applegate, California elementary school where he first learned an instrument. There he worked, observed by students and faculty as he put fingers on strings and pen to paper.

“I wanted to go back to the most stripped down form,” he says, “to when and where music first touched me. It was very soothing, having been at this for 12 years, to limp back to this small town grade school.”

Meanwhile, Sanderson and Allen worked on demos of their own, each still abuzz with ideas and experiences garnered on the infinite tour. In late November 2012, Augustines reconvened for a month of woodshedding at Temperamental Recordings, a converted 19th century country church in Geneseo, New York.

“It was like a music factory,” Allen says. “You could just feel the creativity oozing. We’d been playing basically the same set for two years so it was just like an overflow of ideas, like lava from a volcano.”

“We needed to work with somebody that was mature and confident,” Sanderson says. “Peter is very regimented and organized. He’s level-headed and that helped us to be level-headed as well.”

From the start, the sessions evinced a decidedly more optimistic point of view that the one which fired their heartrending debut, with songs like “Nothing To Lose But Your Head” and the buoyant “Kid, You’re On Your Own” lit by positive vibrations and striking confidence.

“This was us moving on together,” Allen says. “It was wonderful to come through the other end and record a new record. It was a huge accomplishment and looks towards a brighter future for us all.”

“The depth and the place the first record came from is not something that is repeatable,” says Sanderson. “It’s not something one would want to repeat. We did everything we could — as artists, as men – to learn from that experience, to become better people and move on.”

Where their first record was created in relative isolation, “AUGUSTINES” was made “with the awareness that we weren’t going to be alone anymore,” says McCarthy. “This is us handing it over to those people that sang our songs back to us all over the world.

“The first record was obviously very personal,” he says. “It was really for us in many ways. There was almost an exchange – we turned from the interior and started considering some of the breathtaking moments that happened to us on the road, in different countries.”

Indeed, tracks like the thundering “Cruel City” and the album-closing “Hold Onto Anything” demonstrate a distinctly outward shift in sonic scope, interpolating the holistic experience of West African music into Augustines’ sweeping, multi-faceted sound.

“It’s not musicians up on a pedestal,” Sanderson – who studied music in Ghana – says. “The audience is singing, the audience is dancing, they’re all making musictogether..” That’s what we’ve been trying to do our whole lives as musicians, but only recently have we been able to embrace that.”

“It’s all about being inclusive,” McCarthy says. “Interaction is the lifeblood of what we think music is.”

Augustines are eager to bring their brilliant new album to a worldwide audience keen for their return. If “RISE YE SUNKEN SHIPS” provided much needed catharsis, “AUGUSTINES” now takes this very special band to an altogether new plane, transcendent and triumphant. 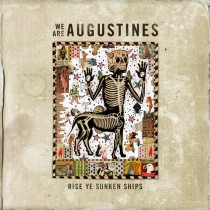